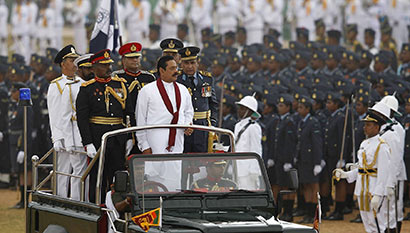 Sri Lanka celebrated the fourth anniversary of the victory in the humanitarian operation with the Victory Day parade at Galle Face – in the capital of Colombo, this morning under the patronage of the President, Mahinda Rajapaksa.

The massive Humanitarian  Victory Day parade with the participation of the troops who actively took part during the final stages of the war against the rebels, rook place ollowing the president’s speech. There was also a two-minute silence in memory of 24,000 security force personnel who died during the conflict, which ended in 2009,

Making his Victory Day speech, the President said that the entire world was asking Sri Lanka to give into the terrorists and avoid confrontation with them, though the Government chose to trust in the strength and courage of the country’s youth.

“This is an era when the bloodshed was ended and a massive transformation was created in the country to the point where the war will no longer continue, the president said.

He stated that when certain people attempted to drag the country’s soldiers to international gallows, the Government implemented beneficiary programs for the families of war heroes including scholarships for their children.

President Rajapaksa said that after the military defeated the rebels and even today, four years on, several attempts are being made to raise human rights allegations against the government.  He also said that these were attempts to undermine the peace that has been won and the reconciliation that is already taking place.He said that most attempts are with the aim of dividing the country, which he said he will not allow.

President Rajapaksa added that people in the North are fully aware how they were affected by the war and that presently 12 political parties in North are engaging in their political activities with complete freedom.

It was the army, government and the people of the country who fed 300,000 people returning after being held hostage by the brutal LTTE, he said, adding, that the current Tamil Diaspora did not come forward to aid the country’s Tamil people during that period.

“When the war ended, we freed most of the top officials of the LTTE with very minor punishments despite the many atrocities their organization committed. We rehabilitated over 11000 carders, resettled thousands of displaced people and demined vast tracts of land,” he said. Pesident Rajapaksa further emphasized that the former LTTE combatants are now living a free life after being rehabilitated. They had committed enough wrongdoings to be sent to the gallows, but the forgiveness afforded to them will not be received in any other country.

Following his speech the President Rajapaksa also awarded the ‘Parama Weera Vibhushanaya’ award, the highest gallantry award any military person receives from the Head of State, on six war heroes.

They were handed over to the family members of the six soldiers who lost their lives during the war.