President Sirisena has given hope to Tamils: Velayutham 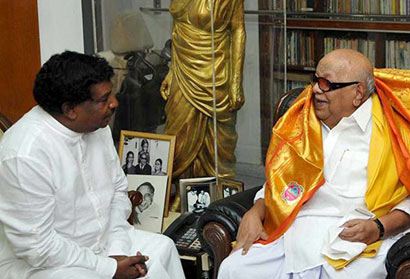 The election of Maithripala Sirisena as the Sri Lankan President has offered a hope to the Tamils in Sri Lanka and they are able to move freely without the Army’s interruption, said K. Velayutham, Sri Lankan Minister of State for Plantation and Industry.

Talking to reporters after meeting DMK leader M. Karunanidhi on Sunday, he said he had explained the situation after change in leadership and efforts were on to withdraw the Army from the Tamil areas and camps.

Mr. Velaytham said one of the priorities of the new government was to rehabilitate the internally displaced people and those who were in the camps.

Asked about the plans to send Tamil refugees to Sri Lanka, he said the Sri Lankan government was ready to provide all support to those who were willing to return.

“At the same time we do not want to force anyone to come to Sri Lanka,” he said.

To a question on the international inquiry against former President Mahinda Rajapaksa for his alleged war crimes, he said an inquiry was already being done in Geneva. “Since Sri Lanka is a sovereign nation, we are for an internal inquiry,” he said.

Home » President Sirisena has given hope to Tamils: Velayutham