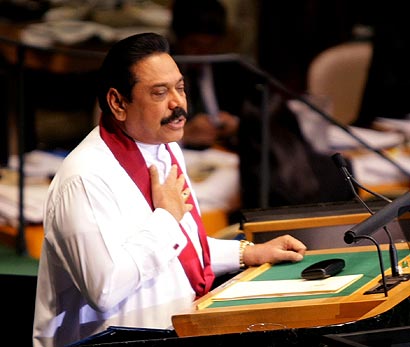 Sri Lanka recognizes the challenges we face, among the greatest of which is healing the wounds of the recent past, said President Mahinda Rajapaksa addressing the 64th United Nations General Assembly in New York yesterday.

To this end, earlier this year, a Lessons Learnt and Reconciliation Commission has been established, giving full expression to the principles of accountability, he added.

The President opined that the rebuilding and healing process should be home grown and the international community should take a practical approach to develop in partnership with Sri Lanka through international trade, investment and capacity building.

Referring to the proliferation of terrorism through out the world, he questioned the capacity of current international humanitarian law to meet contemporary needs.

“It must be remembered that such law evolved essentially in response to conflicts waged by the forces of legally constituted States, and not terrorist groups. The asymmetrical nature of conflicts initiated by non-state actors gives rise to serious problems which need to be considered in earnest by the international community.”

Sri Lanka is pursuing a nation wide agenda of renewal, said the President. It has returned over 90 percent of IDPs to their original villages.

The President underlined the necessity for a supportive external environment for the full realization of Sri Lanka’s potential.

“Towards this end, we will always look for constructive engagement and partnerships. We will from our side, continue to contribute as we have always done, to the cause of multi-lateralism and a principled global order,” the President said.

The continued denial of the right of the people of Palestine to a State of their own within recognized and secure borders has continued to fester for too long, the President said. “It is the fervent hope of the people of Sri Lanka that this most tragic of situations would be resolved without delay in a sustainable manner. We hope that Palestine will be a full member of this Assembly next year.”

“Our guiding principle must always be that of mutual respect in international discourse, even as we disapprove and condemn measures such as unilateral embargoes.” In this respect the President called for “the empathy of the international community, towards the aspirations of the Cuban people.”