President thanks China for continuous assistance to Sri Lanka 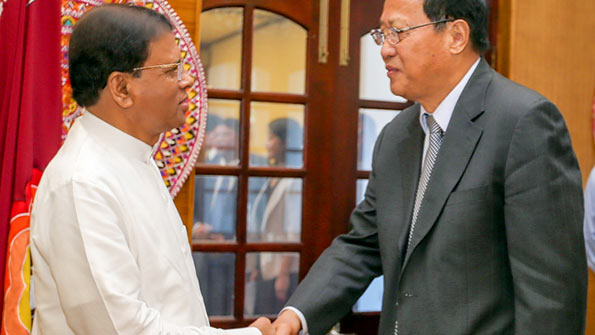 He made these remarks when he met with a group of senior delegation of the Communist Party of China, headed by the Party’s Deputy Leader and Mr Zhang Baowen, Vice Chairman of the Standing Committee of the National People’s Congress of China, at the President’s Official Residence in Colombo yesterday (20).

Sri Lanka expects the fullest cooperation from China to overcome the challenge of poverty in the country, President Sirisena said.

The President thanked them for the continuous assistance provided for Sri Lanka by China in international fora.

The President also expressed his appreciation over the service rendered by the Chinese Ambassador in Sri Lanka to strengthen the ties between the two countries.

Mr.Zhang Baowen presented a memento to the President on this occasion.

Home » President thanks China for continuous assistance to Sri Lanka