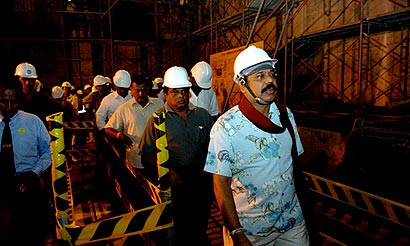 This tunnel which is 12.9 Km in length and has a diameter of 5.2 metres is to carry water from the Kotmale stream to the power station.

This project epitomizes the Government’s commitment to development at a time when it was fighting the most ruthless terrorist outfit in the world. The tunnel is open for public viewing from November 05-07.

Over 150 MW of electricity will be added to the National Grid a year by this project which is funded by the Government of Japan.

The demand for electricity has been growing at an annual rate of 7-8 percent and is expected to increase with the liberation of entire North and the East and dividends of development being delivered to the rural areas.

The growth in electricity demand has closely followed the growth in the economy in recent years, emphasizing the need for a reliable and uninterrupted supply of electricity provided at a reasonable price if the current trend of economic growth is to continue.

This is the run of the river hydro power project which was conceived with the preparation of a master plan for hydroelectric development in the Mahaweli Basin in 1968. The concept was further studied in 1985-1987 when the Japanese Government funded a feasibility study to examine hydropower options in the upper part of the Kotmale Oya.

A dam is located close to the Talawakelle town with a height of 35.5m and a crest length of 180m and an upstream surge tank 12m in diameter and 98m high with a restricted opening located on the crest of the power house.