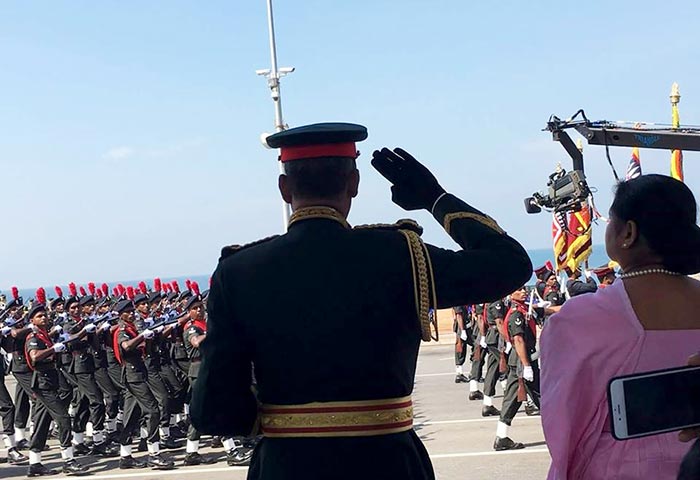 Yahapalana proponent Ven. Dambara Amila Thera declared that there couldn’t be a better person than Fonseka to lead the anti-crime drive.

Ven. Amila was addressing the media at the Center for Society and Religion (CSR), Maradana in the wake of Law and Order Minister Sagala Ratnayake declaring his intention to give up his portfolios.

The monk urged the government to allow police operations to take place outside ‘democratic norms’.

Alleging that the Rajapaksas and their partners were seeking to wreak chaos following Feb. 10 polls, the monk urged the government to operate beyond normal laws of the land.Urging the government to place the CID, FCID and other law enforcement arms under the former Army Chief, the monk requested that the military be placed on alert.

Declaring that the failure on the part of the Sirisena-Wickremesinghe administration to move the judiciary against the Rajapaksas and their associates during the past three years, too, had contributed to Feb. 10 defeat at local government polls, Ven. Amila urged the government to give Fonseka six months to carry out the operation.

Ven. Amila demanded that the government act against those armed forces officers and men who carried out clandestine operations on the directives given by the Rajapaksas. The monk declared that killers and rapists in uniform shouldn’t be allowed to take cover behind uniform.

The monk referred to an incident where officers and men had raped a patient at the military hospital.

Recalling abortive LTTE attempts to assassinate Fonseka during the war, Ven. Amila emphasized that the veteran could achieve yahapalana objectives.

The monk also called for the immediate removal of Agriculture minister Duminda Dissanayake.

The thera found fault with Dissanayake for failing to ensure steady supply of fertiliser and thereby bringing the government into disrepute.

Chameera Perera accused Rajapaksa of having a human shield for his protection. Alleging that the former leader was seeking to plunge the country into crisis, Perera said that the government should be wary of the Rajapaksas’ strategies.

Ratnapriya censured the UNP and SLFP leaders for not taking tangible and immediate measures to restore confidence in the wake of last Saturday’s polls defeat. Ratnapriya alleged that both the President and the Premier had contributed to the current problems and their failure to recognise the threat posed by the former president had further worsened the situation.

Claiming that civil society grouping had played a significant role in the project to defeat Rajapaksa at 2015 presidential poll, Ratnapriya said that President Sirisena and PM Wickremesinghe couldn’t abandon the agreed agenda. The next presidential election was only one year and eight months away and parliamentary polls were not due for two and a half years, Ratnapriya said, urging yahapalana leaders to rein in their ministers.

Ratnapriya urged President Sirisena and his ministers not to act in a manner detrimental to the yahapalana administration’s interests. They were told not to facilitate the ongoing SLPP project but resolve contentious issues without further delay.

The civil society activist warned of the possibility of members of parliament switching allegiance for monetary gains.

Ven. Amila said that JO/SLPP strategy was aimed at causing a permanent rift between President Sirisena and PM Wickremesinghe, isolate the former and then bring the entire parliamentary group under Rajapaksa. The Thera expressed fear that naive yahapalana leaders could be ensnared by Rajapaksa’s strategy.

Speakers warned President Sirisena he had no future with the Rajapaksas as the SLFP considered him a traitor.