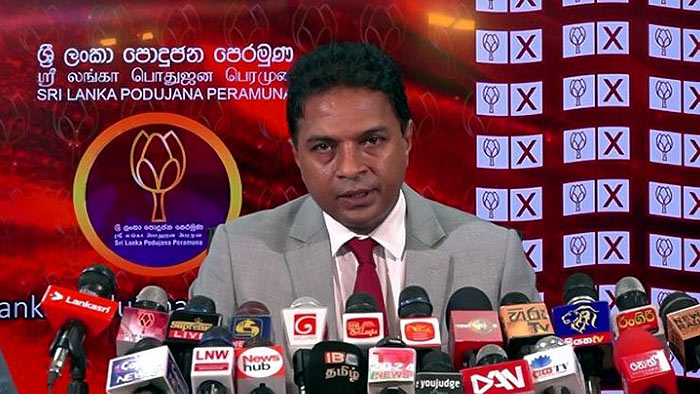 The Sri Lanka Podujana Peramuna (SLPP) claimed yesterday that Industries Minister Wimal Weerawansa has no right to comment regarding any matter related to the SLPP and he must seek public forgiveness on the statement made to a weekend newspaper stating that the Party Leadership of the SLPP should be handed over to President Gotabaya Rajapaksa from Prime Minister Mahinda Rajapaksa.

SLPP General Secretary Sagara Kariyawasam addressing a media briefing said that Wimal Weerawansa should withdraw his comment which is a third class move.

“Prime Minister Mahinda Rajapaksa is the massive pillar that stands behind the success of the country as well as the SLPP. He was defeated baselessly yet the majority of the country still requests his contribution for the betterment of the country,” Kariyawasam said.

He further added that the SLPP will not betray their party for narrow political gains and SLPP will always maintain the code of discipline. “It is unethical for Minister Wimal Weerawansa to state any views regarding the SLPP leadership and he should immediately withdraw his comment and apologize to the party.”

MP Sanjeewa Edirimanna also speaking at the press briefing stated that the SLPP is well known for co-existence among parties and within the party itself co-existence is practiced. He further said that the statements directed towards MP Sagara Kariyawasam by Minister Wimal Weerawansa are baseless allegations.

“Politics is a broad subject; one cannot escape from the collective responsibilities. If Wimal Weerawansa is not satisfied with the current happenings the only thing left for him to do is to resign,” he said.