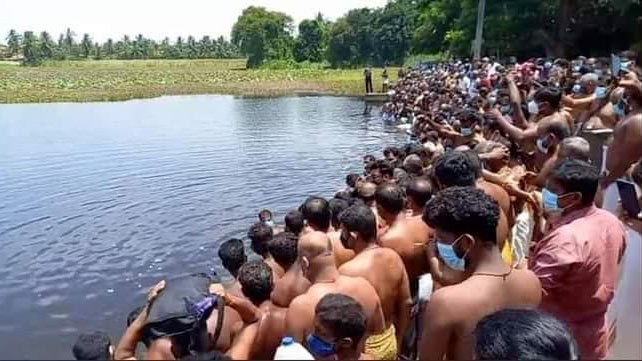 A probe is underway after a Hindu religious gathering was held in a temple in Batticaloa today after pictures of the commemoration circulated online sparking anger as to why it was held amidst a rapidly spreading COVID-19 pandemic.

Pictures circulated online showed a large gathering of Hindu devotees, supposedly at the Mamangam Temple in Batticaloa taking part in religious rituals, without any social distance in place.

Social media users questioned how permission was granted for the ritual at a time when the government has cautioned people from taking part in public gatherings in the backdrop of a rapidly spreading Delta variant.

Geethanath Cassilingham, Coordinating Secretary to Prime Minister Mahinda Rajapaksa and the government’s special resettlement facilitator for the North and East, in a statement on his Twitter account said that it was unfortunate that this incident had happened at a time when people had been urged to remain cautious against the COVID-19.

Cassilingham said he had spoken to officials and the police on ground and a probe was underway.

He further said that a report had been called over the incident.

1 Response to Probe underway into religious gathering in Batticaloa