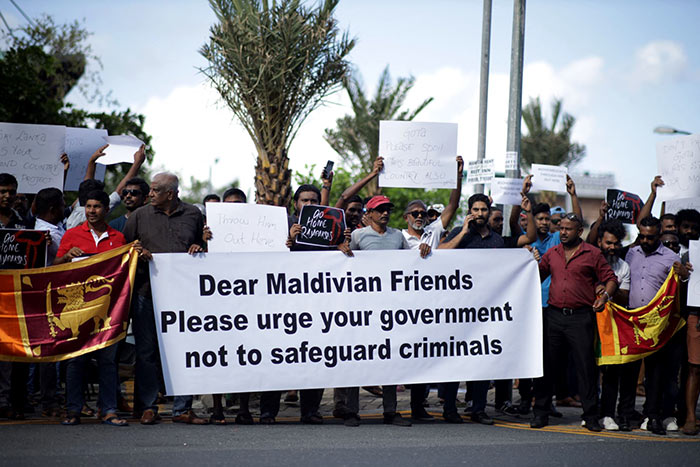 Sri Lankans living in the Maldives staged a demonstration in Male on July 13, 2022, to protest for the arrival of Sri Lankan President Gotabaya Rajapaksa who is fleeing his own country after thousands of protesters overran his official residence accusing him of responsibility for Sri Lanka’s worst economic crisis. (Photo by AFP)

President Rajapaksa fled the country for the Maldives early on Wednesday morning (July 13), along with his wife and two security officers amid mass scale protests against him in Sri Lanka.

The Sri Lankan President arrived at the Velena International airport in the Maldives at 3:07 AM on Wednesday (July 13) and the Maldives capital was under heavy security at that time.

Sources said that former Maldives President Mohamed Nasheed had requested President Ibrahim Solih for the Rajapaksa’s to land in Maldives and clearance was received.

Gotabaya Rajapaksa is expected to be in the Maldives on transit before flying to another destination which is yet to be known.