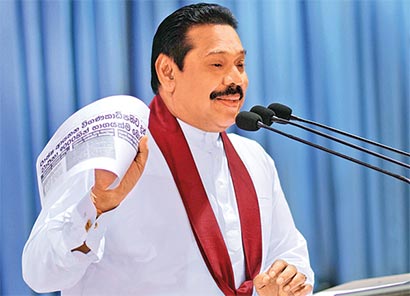 While the government is fully capable of dealing with any pressures that come from Geneva, New York or Washington, it is the public servants and heads of corporations who should ensure good governance to improve the image of the country internationally, said President Mahinda Rajapaksa.

Addressing a gathering of public servants, Heads of state corporations, provincial and local government political leaders on the challenges facing the country, the President said the public administration should be aware of the challenges that have taken place in society, the new expectations in an era of peace and learn to be responsible to the public in all their actions.

The meeting at Temple Trees was organized to take forward the policy of “One Country” in response to current challenges faced by the country and to mark the completion of two years of the government that came to office in the General Election in April 2010.

President Rajapaksa highlighted examples from media reports of a large number of departments that have not prepared annual reports, those who had ignored observations and comments of the Auditor General and failed to respond to possible erroneous media reports about ministries and state departments.

The President said the government has pressing economic needs today. However, it spent nearly Rs.130 billion on the public service to improve the quality of service to the people.

This should be borne in mind by all those whose duty is to serve the public.

Referring to current challenges before the country, he said such challenges were not new.

Speaking in a lighter vein the President said he had just arrived after opening a new office at the Ministry of Disaster Management. I am sure we can all together manage any disaster, he said.

He recalled that the government was able to face up to and overcome tremendous pressure from the time it declared commitment to a unitary state. It was able to take the message of unity against foreign pressure. It was able to face challenges,such as, the fuel price increase, closure of banks due to the international financial crisis and most importantly the major threat of terrorism.

“We were able to overcome these through the policy of Non-alignment. We will remain non-aligned and therefore we can declare that we will not waiver in our policies whatever pressures we have to face”,the President said.

The President wanted the public administration to take note of the changes in society due to the rise in per capita income to 2,600 US dollars and that led to increased expectations among the people. Many development policies carried out by the government have brought new roads, new access to electricity and water and much better expectations from the administration.

“It was necessary to curb wastage and mismanagement and look into the actual necessity of products that are being imported, which could be produced here”, the Presdient said.

He said there were many research institutes and a large number of experts too that could contribute to this. The private sector should be incentivised to look into new opportunities. There must be a new mindset that will be ready to drink fresh milk produced in the country and not to look for powdered milk said to strengthen bones.