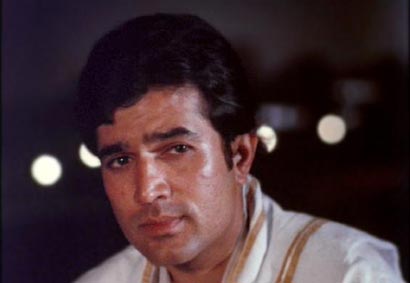 Rajesh Khanna is no more after being critically ill from last few months. He breathed his last in the presence of his ex-wife Dimple Kapadia, daughters Rinkie and Twinkle, son-in-law Akshay Kumar, grand children and close relatives.

From the dizzying heights of fame to quiet shadows behind the arclights, Rajesh Khanna’s life had a theatrical sweep, almost like one of his films.

In an era long before this age of instant connect of mobile phones and internet, Rajesh Khanna was the man who sparked a frenzy never seen before and never since, not even by the likes of Amitabh Bachchan.

His very name spelt magic in the 1970s. He sparked hysteria, particularly amongst his legions of women fans, who would line the road for a glimpse, chant his name, cover his car with lipstick marks and even write him letters in blood. They got married to his photograph, cut their finger, let the blood flow and applied ‘sindoor’.

Kaka, as he was popularly known, was one of the highest paid actors of his time, his record of consecutive solo super hits still unbroken. Who can forget the years between 1970-1979 when he starred in mega hits like “Safar”, “Kati Patang”, “Sachaa Jhutha”, “Aan Milo Sajna”, “Anand”, “Amar Prem” and “Mere Jeevan Saathi”. Ever the urbane, suave romantic who wooed like few others.

Glory and fame galore came his way with the two 1969 films – “Aradhana” and “Do Raaste” – where he teamed up with two of his best co-stars, Sharmila Tagore and Mumtaz, respectively. Both the films were super hits. Hindi film’s first superstar was born.

It was all about charisma – a certain something that went beyond the art of acting. He had that unique way of delivering a dialogue, of crinkling his eyes and that interesting head tilt that were all his own – and designed to get fans swooning.

Describing the charm of Rajesh Khanna, Amitabh once said: “I got famous purely because I was working with Rajesh Khanna in ‘Anand’. People asked me questions like, ‘How is he to look at? What does he do?'”

The mega story had a small beginning in Amritsar. Born Jatin Arora on Dec 29, 1942, he was adopted and raised by foster parents.

He went from being Jatin to Rajesh, thanks to his uncle who changed his name, when he decided to join films.

In 1965, the journey to filmdom started after he won the All India Talent Contest organised by United Producers and Filmfare. He made his debut with “Aakhri Khat” in 1966.

It was a fairly easy road to superstardom after that.

He became the heartthrob of the nation, singing timeless melodies like “Mere Sapnon Ki Rani…” in “Aradhana”, “Zindagi Ek Safar” in “Andaaz” or “Yeh Shaam Mastani” in “Kati Patang”. Singer Kishore Kumar and composer R.D. Burman were amongst his closest friends.

In his four-decade career, he appeared in about 160 films, of which 106 had him as the solo lead hero and 22 were two hero projects.

Rajesh proved his mettle in offbeat films too. He teamed up with Hrishikesh Mukherjee for the critically acclaimed “Bawarchi” and “Namak Haram”. The quintessential romantic also did the intense “Avishkar”, directed by Basu Bhattacharya.

But then age caught up and the star began fading away.

He moved to television and played the main lead in two serials – “Ittefaque” and “Apne Paraye” during 2001-02 and also featured in “Raghukul Reet Sada Chali Aayi” between 2008-09.

The decline to B-grade films was inevitable. There was also the sorry “Wafa” with Laila Khan, who was found murdered this July.

He dabbled in politics, being Congress MP from the New Delhi constituency from 1991-1996.

Like the Hollywood legends of yore, the personal life also had a larger than life dimension.

He fell in love with Dimple Kapadia, who was only 16 and whose first film “Bobby” was yet to release. She was 15 years younger to him but the pull was strong and they got married after a whwhirwind romance in 1973.

It was the stuff of tabloid headlines. They had two daughters Twinkle and Rinke. The marriage lasted only 11 years.

It was a lonely life for Rajesh after that. He disappeared from the headlines and appeared to be a shadow of his former self in his rare public appearances.

But the family came together in his last days. His estranged wife was the one who took care of him during his illness. Son-in-law Akshay Kumar was also a great comfort.

Rajesh reappeared in an ad a few months before his death, and once again became the talk of town – he was clearly unwell but the zest in his voice was intact as he intoned “Babumoshai” from his much loved film “Anand”.

Like Anand from the film, the man is gone. But the memories will live on.