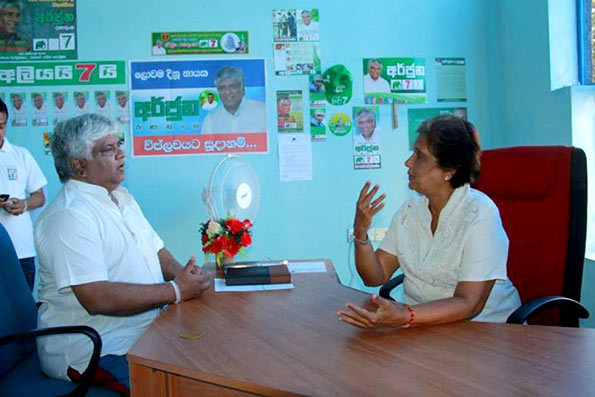 Chandrika Kumaratunga will never support the Sri Lanka Freedom Party as long as there are corrupt and unwanted people in it, said Minister of Ports Shipping and Aviation Arjuna Ranatunga.

“How can Chandrika Kumaratunga support the SLFP? That party is full of corrupt people. She does not want to work with such people in SLFP. I am sure till the SLFP does away with these corrupt people she will ever support them,” pointed out Minister Ranatunga.

Commenting about the SLFP’s decision to cancel his party membership, the cricketer-turned-politician noted: “I haven’t got anything from the party in writing. When I think about some of the politicians who have been protected by the UPFA, if they can get rid of a person like me, the entire country can see what type of a party SLFP is. Believe me they don’t want to have good people in the UPFA. They only want people who are corrupt, who create issues with religion and caste. They throw us out and protect the corrupt people. This is the sad story of the SLFP.”
Following are excerpts of the interview:

Q: Why did you decide to contest from UNP?

A: Even at the last general election I contested from the Democratic National Front. I always take decisions thinking about the country. I respect Bandaranaike policies and old SLFP policies. But I do not approve of the SLFP’s current policies where they protect all the corrupt and unwanted people in the country.

This time I was very keen to contest from the UPFA. Unfortunately they included lots and lots of corrupt people in the list. If we want a ‘yahapalana’ government, you cannot sit with them on a stage or discuss anything serious with them, simply because they are not the right people to do so. That is the reason why we took a decision to speak to Prime Minister Ranil Wickremesinghe. He was very keen to see us joining United National Front. But unfortunately we had very little time otherwise we should have gone under the swan logo.

Wickremesinghe has been very cooperative in the last few months. Then we thought this is the best way to get the majority and support the President.

Q: Why did you change your electorate? What made you shift from Kalutara to Gampaha?

A: At the last election I shifted to Kalutara because DNF Leader Sarath Fonseka was contesting from Colombo. However, I have been working in Gampaha during the last six months with the SLFP. Then I decided that I also have a right to work for my hometown. I thought I should try and see whether I should contest and win from the electorate where I was born.

Q: We see Chandrika Kumaratunga openly supporting your campaign. Why is she backing you?

A: Chandrika Kumaratunga is the one who dragged me into politics. She has been very helpful from the day I took office. Actually she has been with me from the day I started my political career. Kumaratunga is helping me a lot in some of the areas where she is good at. I don’t expect her to get onto a stage with me, but I have her blessing and fullest support.

Q: Does that mean she is no longer supporting the SLFP?

A: How can she support them? She does not want to work with the corrupt people in the SLFP. That is the reason why she moved away and encouraged Maithripala Sirisena to contest from a different logo as an independent candidate. I am sure till the SLFP does away with these corrupt people she will ever support them.

Q: You continue to vouch to bring good governance but it was under the same administration the Central Bank bond scam happened. The latest killing in Bloemendhal too leaves a question whether the present rulers have links with the underworld. In such a context, how can you claim to bring ‘yahapalanaya’?

A: Let me start with the bond scam; there are ongoing inquiries about this matter. We will make sure that proper action will be taken after the election. If we take the Bloemendhal shooting incident, I really don’t know the story behind this. All I can say is that we didn’t have any underworld incidents during the last six months. Why do these incidents emerge closer to the election?

Whether it is done by the UNP or the UPFA, I do not agree with that. My only concern is that they were silent and inactive during the last six months. I don’t know whether it is a battle between the UNP or whether there is an undercurrent going on.

Q: Another pledge made by the ‘yahapalana’ Government is to combat corruption and take action against people who were involved in such wrongdoings. Are you satisfied with what you have done in this regard?

A: We do things the proper way. We don’t do things the way Mahinda Rajapaksa did. What Rajapaksa did was when he got hold of someone he put them in the jail. But we don’t work like that. We don’t interfere with the legal system. That is the reason why these inquiries are taking a little more time.

There are more than 40 politicians going through inquiries. But sometimes I ask myself, ‘why cannot we be like Rajapaksa and throw them into jail?’ I might have felt like that more than 100 times. But when the President and Prime Minister remind us that we have come to power to bring good governance, we too feel the importance of doing things the proper way.

Q: Your membership has been cancelled by the SLFP. Will you obtain membership from the UNP?

A: I haven’t got anything from the party in writing. They may have made an announcement but then again there are lots and lots of announcements regarding various issues. They should conduct a proper inquiry before taking such a decision.

When I think about some of the politicians who have been protected by the UPFA, if they can get rid of a person like me, the entire country can see what type of a party SLFP is. Believe me they don’t want to have good people in the UPFA. They only want people who are corrupt, who create issues with religion and caste. They throw us out and protect the corrupt people. This is the sad story of the SLFP.

Q: What are your remarks about the outcome of the election? Do you think you can form a government?

A: I think we have a very good chance of forming a government. So far we are doing very well. However, my personal view is even if we get the 113 we should form a national government. Let the two main parties get together thinking about the country and not their personal agendas. We have got a President and a Prime Minister who are not corrupt. They have a vision. This is the last chance we will get to sort out some of the major issues.