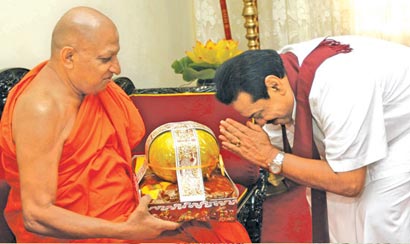 The President instructed authorities to provide parking space for Kandy City traders’ vehicles at the four storeyed car park in Kandy at concessionary charges if the vehicles parked in the heart of the city cause traffic congestion. President Rajapaksa said heavy vehicles transporting sand over the stipulated quantity damage roads and requested the authorities to take appropriate action.

Meanwhile, President Rajapaksa also said arrangements, are being made to construct a tunnel from Bogambara grounds to Buwelikada to minimize traffic congestion in the Kandy city.

President Rajapaksa walked to the Dalada Maligawa along Lake Road and Dalada street from President’s House, Kandy to pay homage to the Sacred Tooth Relic yesterday.

The President also urged the public not to use vehicles to go to Dalada Maligawa.

When the President called on the Most Ven Udugama Sri Buddharakkitha Mahanayake Thera of Asgiri Chapter he said that no one in the world is allowed to reach world famous religious places by vehicles.

Accordingly the Dalada Maligawa should receive the same honour, he said.

“Those who attempt to open the road leading to Dalada Maligawa may blame us for not opening it but once they realize the importance of closing the road, will appreciate what we had done,” President Rajapaksa said.

The Mahanayake thera said widening Lake Road and constructing a tunnel to Buwelikada through Udawattakelle is an urgent need.

The President said permission will not be granted to maintain meat and fish stalls and liquor shops in the vicinity of sacred places.