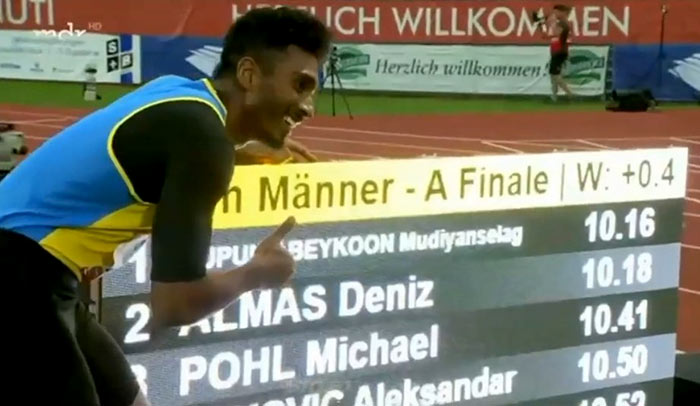 Italy based sprinter Yupun Abeykoon shattered the Sri Lanka National record and the South Asian men’s 100 metres record, offering glimpse of hope to end more than two decades of wait for a Sri Lankan champion to feature in an Olympics in the glamorous sprint event.

Former Pannala National School and St. Joseph Vaz College athlete clocked 10.16 seconds to break Himasha Eshan’s national record at a championship in Germany where he beat a host of German sprinters to win the 100 metres dash on Tuesday.

Congratulatory massages were a galore in the social media from midnight Tuesday as the track and field fraternity took stock on the capabilities of a 4×100 metres relay team at regional international level and Abeykoon’s own chances of qualifying for the quadrennial event.

In an interview with The Island Abeykoon thanked every one who had helped him reach where he is today and stressed that earning Olympic qualifying standards was his goal.

He said that he missed two months of training due to Covid-19 pandemic and commenced training in July. His two coaches Maurizio Raparelli and Claudio Licciardello had prepared plans to asses his strengths this season and he was reaching the peak.

He had been in Italy for five years now and had dedicated his time fully for training while his expenses had been bone by his parents.

“I would like to thank those who helped me on my way to achieving the national record. My coaches, my parents, Gen. Palitha Fernando, the president of Sri Lanka Athletics who had been in constant contact,” said Abeykoon.

“I was congratulated by the new Sports Minister in the morning. It is the first time that I received any communication from the Ministry. I hope country’s athletes will get the necessary support.”

“From now on I will target achieving Olympic qualifying standards,” said Abeykoon.

The 25-year-old had produced a notable feat days ago before smashing the national record established by Eshan last year.

With Abeykoon now inching closer to the tough Olympic qualifying mark, pressure will be on home based athletes like Eshan, Suranjaya and Yodasinghe to earn the rare berth.

“This pressure will help Sri Lanka improve standards in the 100 metres and we will be able to field formidable relay teams for international events,” Sri Lanka Athletics statistician Saman Kumara told The Island.

Incidentally, Abeykoon who was placed third behind Himasha Eshan and Vinoj Suranjaya at the National Championships in 2019 produced impressive performances ahead of the last South Asian Games. Sri Lanka Athletics had taken a policy decision to feature only the winners of the National Championships for individual events of the regional Games thus he could not featuring in the 100 metres. He was selected only as a member of the relay team for the South Asian Games where he anchored the team to gold.

A Sri Lankan 100 metres sprinter has not competed at an Olympics since the former champions, Asian Games medallist Sriyantha Dissanayake in Barcelona 1992 and Chinthaka de Zoysa in 1996 Atlanta Olympics represented the country. There had been a few national sprinters, who had given much hope early in their careers but the ever improving standards during the Bolt-dominated era made the country wait for more than quarter of a century. With the World Athletics raising the qualifying standards for the 100 metres dash to tough 10.05 seconds for the postponed Tokyo event, not many analysts could bet on a Sri Lankan sprinter for the coveted berth. But now with Abeykoon showing signs of vast improvement under a foreign coach, local authorities are left to keep their fingers crossed at the prospect of winning a 100 metres spot for Olympics.

Abeykoon who left for Italy after his schooling was coached by Chaminda Sampath Weerasinghe when he was at Pannala National School and St. Joseph Vaz College.

(Source: The Island – By Reemus Fernando)