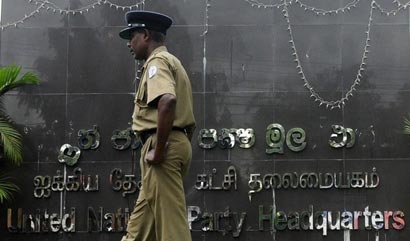 At least five more vociferous critics of the UNP leadership, from the party’s rebel wing, would be suspended next week followed by disciplinary inquiries against them, a top Sirikotha source disclosed yesterday.

Political observers see this impending move as a further move to consolidate the position of party Leader Ranil Wickremesinghe, who was re-elected recently by the party Working Committee and the parliamentary group amidst rioting, by rebel supporters, in protest.

Source said that the party working committee would soon take a decision on those to be suspended and submit the decision to the leadership for action. If the disciplinary inquiries found them guilty they would thereafter be expelled from the party.

Two leading rebels, Matara District MP Buddhika Pathirana and Western Provincial Councillor Shiral Lakltillake have already been suspended and their disciplinary inquiries have yet to be completed, even though, at the time of suspension, promises were made to complete the hearings within two weeks.

The reformist camp’s media spokesman for the Movement to Protect the UNP, Lal Perera told The Island yesterday that they were not surprised by the actions of party Leader Ranil Wickremesinghe, who surrounded by a self-serving coterie of businessmen, was not interested in the unity or the future of the party, but was carrying out a contract of the government to either drive most of the remaining UNPers to the government ranks or out of politics.

Perera said they were aware that the party leader was now gunning for leading reformists like Dayasiri Jayasekera, Sujeewa Senasinghe and Rosie Senanayake.

Another leading light in the reformist camp, parliamentarian Ranjith Maddumabandara, who managed to secure his seat in the Moneragala district, despite Wickremesinghe openly calling on party voters not to cast their vote to him at the April 2010 polls, yesterday warned that if any more reformists were suspended they would organize protests by UNP supporters countrywide.