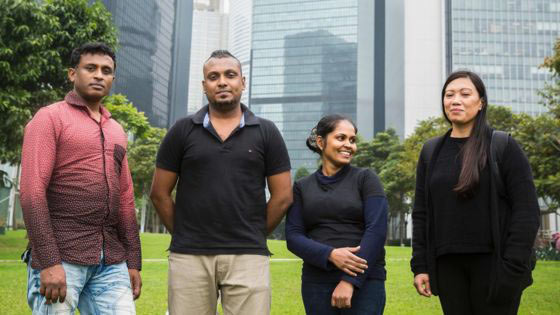 The three families’ lawyers have filed claims on their behalf.

Some city legislators say two Sri Lankan nationals have been targeted by police from their own country who have travelled to Hong Kong.

The refugee families fed and housed Mr Snowden for two weeks when he fled the US after leaking thousands of files.

They are still living in poverty in Hong Kong and unable to work after providing a refuge for the American in July 2013.

Their lawyers say it is “a matter of life and death” if they remain in the city.

Mr Snowden – who now lives in Russia – tweeted on Thursday that he hoped Canada would grant their request.

Canadian immigration lawyer Marc-Andre Seguin said that over the past few weeks the refugees’ lawyers felt they needed to take additional steps to speed up the process.

“It’s very clear that discretionary power should be applied,” he told the South China Morning Post, referring to the ability by Canada’s immigration minister to expedite claims.

Two of the refugees – Sri Lankan nationals Kellapatha Supun Thilina and Debagma Kankanalamage Ajith Pushpa Kumara – have said they are being illegally pursued by police from their own country.

They fear being forcibly returned to Sri Lanka, and that they could face violence and torture.

The refugees also say Hong Kong authorities have questioned them on their ties to Mr Snowden.

Speaking to the AFP news agency, Vanessa Rodel – who is from the Philippines and among those seeking asylum in Canada – said: “I am hopeful that we can get into Canada and start a new life (with) safety and freedom.”

Mr Seguin and others, including actor Joseph Gordon-Levitt, who played Mr Snowden in the eponymous film, have been trying to raise awareness about the refugees’ situation.

Canadian officials have yet to respond to request for comment.