Representatives of reconciliation should educate both North & the South – President 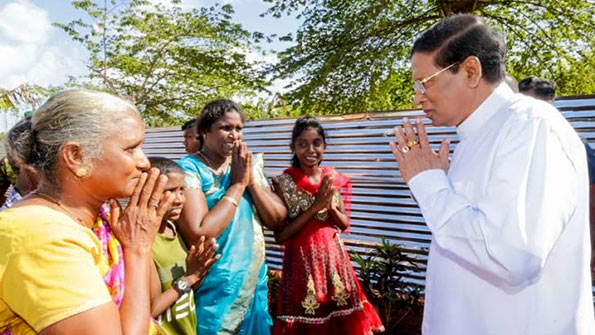 He was addressing the ceremony to hand over 701 acres of lands to original owners who lost their lands during the war. The ceremony was held yesterday (March 12) at the Nadeswara Vidyalaya in Thelippalei.

Accordingly, 650 families in Thelippalei and 50 families in Kopai were endowed with their rights for their homelands today. Consequently, all lands in Kopai which were under the control of security forces have been released.

Also, the Nadeswara Maha Vidyalaya in Thelippalei which had been using by the security forces during the time of war, was released for the education of the children in the area. The proprietorship was bestowed to the Principals of the school after 25 years. As a result, the children who have been trying to achieve their educational needs at temporary schools will get the opportunity to study in the school in their own village.

The President also visited a model house built in Thelippalei under the project to build 65, 000 houses for the displaced. He pointed out the importance to plan those houses, considering the interest of the people who are going to reside in the houses.

Addressing the gathering of the ceremony the President emphasized that the government is protecting the rights of all people both in the North and the South.

He also ensured that the Government would give priority to resettle the displaced in the North in their places of origin.

He stated that a group of extremists in the South is making various allegations and criticisms against this program. He requested them to come to the North and witness the poor situation of the innocent people, living in the camps.

Home » Representatives of reconciliation should educate both North & the South – President