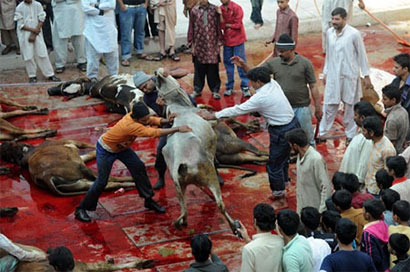 It is both unfortunate that 4th October was the Animal Rights Day and two days later 20million animals lost their rights and are subject to a violent and terrifying death while 1.3billion Muslims celebrate. Is a God so bloodthirsty and will our sins be forgiven by slaughtering an animal who had nothing to do with our sins? We are not living in prehistoric tribal times. Our minds are far developed, educated and we have a power to think logically and humanely. Should these ancient rituals now be looked at with greater compassion in view of the unthinkable ways these animals meet their death.

What is confusing to the debate is that there are scores of verses in Islam’s holy texts where Allah praises animals and this prompts us to ask exactly how far are today’s Muslims willing to follow rituals and superstitions if there is nowhere written that animals should be slaughtered?

Nonetheless, during this three day festival, millions of peaceful sheep, cattle, goats and camels will face death. In Saudi Arabia alone close to 700,000 animals are sacrificed annually. The streets run red with blood and become a sea of blood before which sheep and cattle are kicked, beaten, dragged by their ears and legs, tossed from trucks, cattle have their tendons slashed and eyes stabbed with knives while sheep are lined up in rows and have their throats slit waiting for their turn. These animals are carted from around the world and thousands of them die at sea as well.

The Australian Federal Government allows 3-4million sheep, 900,000 cattle and 97,000 goats annually to be sent to meet a cruel fate.

It is understood that the issue of animal sacrifice is a sensitive one. Sacrifice is not a pillar of Islam and it is not obligatory either in so saying, the next question is how can we rise above the feeling that in stopping animal sacrifice it would make them any less a Muslim. What needs to be also understood is that the Quran is a work of 22 years and changed with times. If changes were made with time, should the Muslim world also not think of changing habits that today does not meet any logical standards?

Is it also not true that the Quran never says God told Abraham to sacrifice his son, nor does the Quran say that Abrahams’ dream was from God. There is also a need to understand that the context of sharing with poorer members of Muslim society then and now differ and there are many alternatives that the poor can be helped. We can bring as an example Rizana who was beheaded and state that despite the poor condition of her family, it was the State that eventually built a house for the family!

Not eating a sacrificed animal does not make a Muslim any less a Muslim.

The context of the argument is approached in 2 dimensions. Firstly, it is the colossal death of around 20million animals in 3 days of festivity for Muslims. Such a bloodbath is totally unfair and immoral as many of these animals provide livelihood to a host of others. Secondly, the manner in which these animals are transported and killed is gruesome and totally inhuman. Animals are as emotional as humans and they only lack the ability to speak. We can imagine our own selves lined up to go through the abusive treatment that these animals go through to feel what these animals must be going through before their death.

We are living in the 21st century. What we do must be meaningful. Look around and see how man has degraded himself. The recent Islamic militant movements are showing off sacrificed men’s heads on poles and media are happy to relay this across its media channels. We have brought ourselves to look no different to an animal and it is time we stop, take stock of our values and adjust our ways.

20million animals should not have to meet their death.

The onus is on the Muslim religious leaders and the general Muslim public to look at the blood filled streets and ask themselves is this worth it and whether they should rethink ritual animal sacrifice and find alternate means to help the poor.

5 Responses to Rethinking Superstition: Should Hajj celebration end up with 20million animals slaughtered?