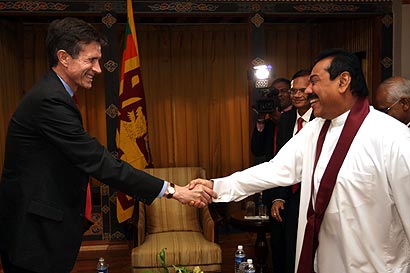 US Assistant Secretary of State for South and Central Asian Affairs Robert O Blake visited the Sri Lankan House in the SAARC village in Thimpu, Bhutan to meet President Mahinda Rajapaksa ahead of the SAARC Summit. Former US Ambassador for Colombo Mr Blake is in Thimpu now, discussed the recent developments following the Presidential and General elections in Sri Lanka. However further details of the discussion was not made available.

Mr Blake who made many controversial comments against President Rajapaksa’s government leads the US observer delegation to the Thimpu SAARC summit. He will hold bilateral talks with the South Asian leaders on the margins of the summit.