Defeat of separatism and terrorism has given us the opportunity to engage in open discussions without fear of guns, says President Rajapaksa at SAARC 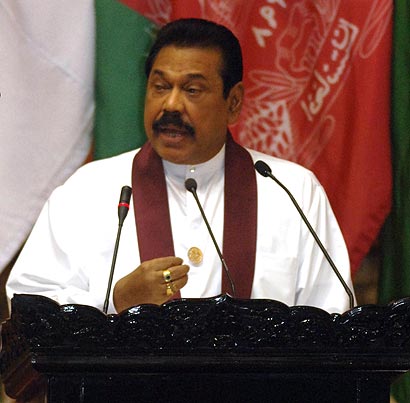 “The defeat of separatism and terrorism since then has given us now the opportunity to engage in open discussions and reach consensus, without the fear of guns. With the strong mandate expressed at both the recent Presidential and Parliamentary elections, I am now ready to lead our nation and her children to a brighter future”, said President Mahinda Rajapaksa at 16th SAARC Summit in Thimpu, the capital city of Bhutan this morning on 28th April.

He further stated that SAARC is the one organisation working for the welfare and socio-economic advancement of the people of the region. The hallmark and indeed the strength of the SAARC, is collective identity, promoted and strengthened by over two decades of regional cooperation within the SAARC framework. It has been and remains a crucial factor in forging closer links among SAARC governments and more importantly, amongst the people of the region. President Rajapaksa also told the heads of SAARC states that despite an adverse global economic environment Sri Lanka has achieved economic growth at about 6 percent per annum. Meanwhile, the per capita income has increased from one thousand sixty US Dollars in the year 2005 to two thousand fifty US Dollars today. The president said what is of even greater importance is the success achieved in ensuring that the benefits of this progress filter down to the village level.

President Mahinda Rajapaksa made these comments in his address to the 16th SAARC Summit and here is the full text of the President ’s speech at Thimpu, Bhutan on Wednesday April 28, 2010

It gives me great pleasure to be with all of you in this serene and enchanting city of Thimphu.

Prime Minister Thinley, you have today assumed the Chair in the Silver Jubilee Year of SAARC. I pledge my wholehearted cooperation towards the success of your leadership of our Association. In keeping with the national traditions of the people of Bhutan, we have been accorded a most warm welcome and generous hospitality by the Royal Government of Bhutan. Excellency, I value this opportunity to be in your country with which we share a common spiritual bond and long-lasting friendship.

Excellencies, when we met in Colombo at the 15th SAARC Summit less than two years ago, Sri Lanka had been engaged against terrorism for a period, sadly spanning over three decades. The defeat of separatism and terrorism since then has given us now the opportunity to engage in open discussions and reach consensus, without the fear of guns. With the strong mandate expressed at both the recent Presidential and Parliamentary elections, I am now ready to lead our nation and her children to a brighter future. I am confident that in this effort, I will have the fullest encouragement and cooperation from Sri Lanka’s closest neighbours, all of whom are present here in this forum today.

SAARC is the one organisation working for the welfare and socio-economic advancement of the people of our region. Our hallmark and indeed our strength, is our collective identity, promoted and strengthened by over two decades of regional cooperation within the SAARC framework. It has been and remains a crucial factor in forging closer links among our governments and more importantly, amongst our people. As SAARC marks its Silver Jubilee, we must take pride in the efforts taken since 1985, step by step, to build the Association. We now stand on the doorstep of our continued onward journey, towards the next generation of cooperative efforts.

Undoubtedly we all see ‘Climate Change’, the theme of our Summit, as being most timely. The impact of this phenomenon is of acute and common concern for all of us in the South Asian region, from the snow capped mountains of Nepal and Bhutan to the sandy beaches of Maldives and Sri Lanka. The South Asian voice on this issue guided by the principle of common but differentiated responsibilities must be strongly heard in all international fora. Those in the developed world who have historically contributed to the climate change must now bear the lion share of the burden to mitigate this phenomenon.

Commitment to democratic governance now encompasses our entire region. Our economies led by the dynamic growth of India, have weathered the global recession successfully. In my country Sri Lanka, we have been able despite an adverse economic global environment to achieve economic growth at about 6% per annum, while the per capita income has increased from US Dollars one thousand sixty in the year 2005 to US Dollars two thousand fifty today.

What is of even greater importance to me is the success we have achieved in ensuring that the benefits of this progress filter down to the village level. It is crucial that economic development should not be restricted to mere statistics. It should touch the community at all levels and make their lives easier, richer and more satisfying. The tremendous progress which has been achieved in my country at the village level, in terms of construction of roads, irrigation systems, power and energy supplies, drinking water and improved facilities in schools and hospitals, has given economic progress a practical dimension enriching the life of the community in all sectors. We were committed to this emphasis on development in the midst of security operations against terrorism.

This policy, which has brought rich dividends to our country, is underpinned by the conviction that economic progress does not require the mass movement of populations from the rural hinterland to urban areas. Rather than moving people to urban areas, which brings about a variety of problems connected with housing, water, sewage and many social issues, my government has consistently preferred to make facilities and resources available to the rural population in their own areas. This is the explanation of the recent resounding mandate that my government has received from the rural population in all areas of Sri Lanka.

Nevertheless despite many examples of the achievements gained within our region, we in South Asia sometimes underestimate our collective strength. We tend to discount the resources and skills we have, that can meet our development challenges as well as our social and security needs. In fact, we often tend to provide priority to our engagements with extra regional actors, without devoting sufficient attention to further developing and strengthening the links within our own regional organization.

Therefore, let us within our own grouping be bold enough to introspect. We must take measures to improve the existing mechanisms through review, rationalisation and reinvigoration. If there is a need, we should not hesitate to build new structures and mechanisms, to enable SAARC to reach its full potential.

As regards the world outside our region, the need of the hour is for SAARC to enhance its collective interactions on global issues. We must uphold our sovereign right to decide on what is best for us. We must strive to avoid externally induced rigid solutions. We must rather rally behind home grown and intra-regionally evolved measures. Towards this end, we should now endeavour to strengthen the mechanisms to speak with one voice on issues of common concern for our region in international fora, in particular at the United Nations.

During Sri Lanka’s steward-ship of SAARC, we attempted, over the past eighteen months, several initiatives aimed at enhancing cooperation in important sectors for the region. Our efforts included the hosting of six Ministerial Meetings in the sectors of Energy, Higher Education, Children, Transport, Science and Technology and Parliamentary Affairs. This period reiterated to us the message that when there is the will, the way to work together does not lag behind. For instance, at Sri Lanka’s initiative, the SAARC Foreign Ministers, who met in Colombo in February 2009 for the Inter-Summit Session, issued a Joint Ministerial Statement, responding to the then emerging global economic crisis. That Statement was perhaps one of the first on this issue from a regional organization.

The most effective means at our command to make SAARC an even more robust organisation is to link seamlessly the processes and activities of regional cooperation, with the aspirations of the mass of our people. Towards this end, let us see how like in several other areas of the world that have embarked on regional cooperation, we can best draw on the democratic and participatory tradition collectively represented by the Parliamentarians of South Asia, to boost the progress of SAARC. I would hope that indeed the time is not too distant, when we may within our region, envisage a regular Conclave of SAARC Parliamentarians. Such a Conclave will further engage the support and involvement of the People’s Representatives. It will thereby make SAARC popular within the region. The goal must be for SAARC to become truly people centric.

The two Regional Instruments that are to be signed at this Summit, namely the Agreement on Trade in Services and the Convention on Cooperation on Environment cover two important areas that have a direct impact on the lives of our peoples.

We must also resolve in this ‘Decade of Intra-regional Connectivity in SAARC’, to work diligently to strengthen both the physical and soft connectivity between our countries and peoples. We must find, as well, the best and the most practical means to implement the provisions of existing SAARC Conventions, especially against Terrorism.

Last, but not least, SAARC, as a regional organisation cannot progress in isolation. We must, therefore, strengthen the means for practical engagement with the SAARC Observer States and with selected International Organisations in particular, for our development efforts.

South Asia is a region that is home to one of the world’s oldest and most magnificent civilisations. We have given forth to the world, a large number of its greatest sages, scientists, political activists, poets and artists. I have always believed that human beings have the capacity to achieve the most difficult and noble goals in life, so long as there is commitment and dedication. Therefore, if we are determined enough I am confident that we, as a region, can through our own efforts, realise our full potential. The Lord Buddha said,

“Oneself is one’s own benefactor”

Surely at this juncture, we must allow these words of wisdom to guide the destiny of our region.

May the Noble Triple Gem Bless you all.

Home » Defeat of separatism and terrorism has given us the opportunity to engage in open discussions without fear of guns, says President Rajapaksa at SAARC