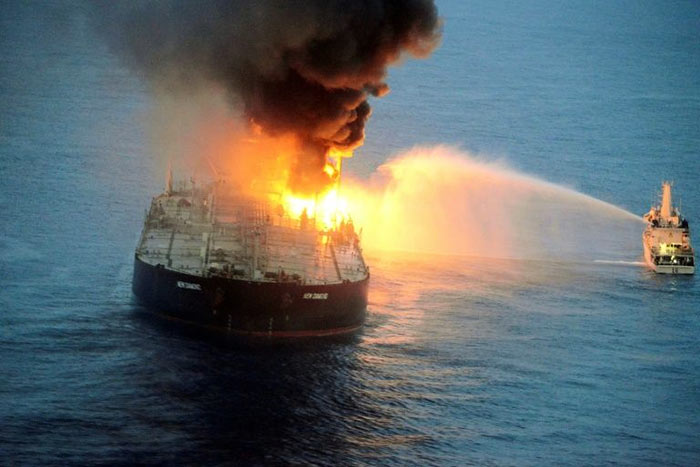 Attorney General Dappula de Livera has submitted documents related to the marine pollution claim for Rs.3.423 Billion (19.022 Million USD) to the lawyers of the owners of the crude oil tanker ‘MT New Diamond’ vessel in respect of the oil spill.

The Attorney General’s Coordinating Officer, State Counsel Nishara Jayaratne stated that the documents were handed over to the lawyers of the Greek company that owns the ship in connection with the recovery of Rs.3.423 billion (US $ 19.022 million).

In September 2020, the MT New Diamond’s oil tanker crashed off the coast of Sri Lanka and the Attorney General had instructed the shipping company to pay the amount due to the pollution caused by the oil spill from the vessel.

Previously, the Marine environment Protection Authority (MEPA) had sought the Attorney General’s advice on taking legal action under the Marine Pollution Prevention Act in connection with the marine pollution caused by the oil spill from the vessel.

The Marine Environment Protection Authority was informed by the Attorney General to go to the location of the vessel and investigate whether the oil spill from the vessel had caused marine pollution in the area.

Following that, the report on the damage caused to the marine environment due to the fire had been handed over to the Attorney General.

According to the evidence and observations submitted by the MEPA, the Attorney General maintains that it was clear that the oil spill was from the vessel. At a previous occasion, the Greek company that owns the MT New Diamond’ vessel paid Rs.442 million as initial compensation to local companies involved in extinguishing the fire.

The Navy, the Air Force, the Sri Lankan Port Authority, the Colombo Dockyard, MEPA (Marine Environmental Protection Authority) and the Coast Guard have all calculated the cost of extinguishing the fire that broke out on the vessel.

The 20 year old MT New Diamond crude oil tanker was transporting 270, 000 metric tons of crude oil from the port of Mina Al Ahmadi in Kuwait to the Indian port of Paradip when a fire broke out abroad in the eastern seas of Sri Lankan on September 3.

The vessel was sailing 38 nautical miles off Sangamankanda Point when it caught fire with an explosion in a boiler in the ship’s main engine room.

A joint effort by the Sri Lanka Navy, Air Force and Indian Navy succeeded in extinguishing the fire.