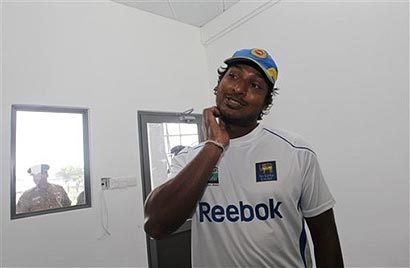 The three-Test series, which was dogged by rain, ended in a 0-0 result with the first two Tests at Galle and Colombo also drawn.

“It will be nice to see if we can make sure the weather patterns and all of these things are properly analysed. But it is tough these days; the weather’s all topsy turvy,” Sangakkara said.

“It’s probably the worst Test series I’ve ever experienced. I’ve never seen anything like this before. It was pretty frustrating to sit in the dressing room and watch the rain.

“It would have been nice to see if we had alternative venues as well to see if one failed and the weather was not great and the preparations not great, we could have gone somewhere else.”

The bad weather enabled West Indies to draw a Test series in Sri Lanka for the first time. The two previous series played in 2001 and 2005 ended in 3-0 and 2-0 defeats.

“When we left West Indies we said we would settle for a draw or a win. We have lots of positives after the Test series and we are looking to build for the future,” West Indies captain Darren Sammy said.