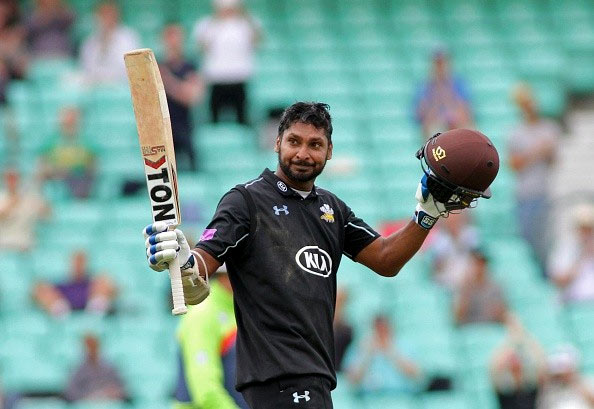 London – Sri Lanka great Kumar Sangakkara’s superb century saw Surrey into the final of English county cricket’s one-day cup as they saw off Nottinghamshire by four runs in a thrilling clash at The Oval on Monday.

The veteran left-hander made 166 in 138 balls, the highest score in this season’s tournament, and Surrey will now face Gloucestershire in the final at Lord’s on September 19.

Nottinghamshire, chasing 301 for victory, recovered after they declined to 16 for three, 17-year-old Sam Curran taking two wickets in two balls in his first over, with the visitors missing batsmen Alex Hales and James Taylor because of England duty.

But Greg Smith made an outstanding 124, while Samit Patel and Dan Christian added a fifty each.

Tom Curran, Sam’s brother, held his nerve when Nottinghamshire needed 14 runs off the last over.

Earlier, Sangakkara’s magnificent innings was a testament to the 37-year-old’s physical fitness with 90-yard square boundaries restricting him to 13 fours and one six in just under three hours at the crease.

Sangakkara showed plenty of flair, notably in the 49th over when he hit successive ramp shots over wicket-keeper Chris Read off left-arm seamer Harry Gurney and a crunching drive through extra cover for a third successive boundary.

He accelerated from 100 to 150 in just 29 deliveries before he failed to clear third man with another ramp shot off the first ball of the final over.

“It was a wonderful game of cricket and the difference was probably Kumar Sangakkara’s innings,” said Surrey captain Gareth Batty, with his star batsman having recently retired from Sri Lanka service.

“I think he’s still the best player in the world. He’s not playing international cricket anymore, which is a shame for the world game but great for us.

“We thought 300 was a decent score but we knew it would be tight because Notts are a very good team and Greg Smith scored a great hundred for them.”

Nottinghamshire captain Read added: “It needed something special for us to get close after Sangakkara played a fantastic innings. We needed a big score but we just ran out of gas at the end.