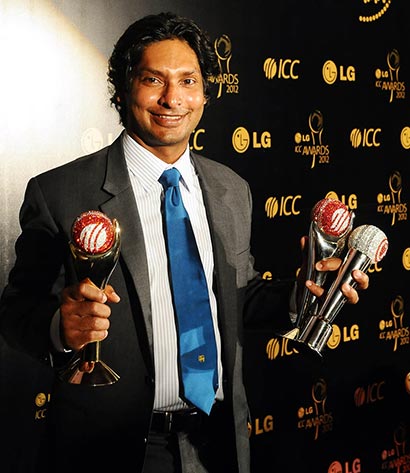 For Cricketer and Test Cricketer of the Year, Sangakkara was chosen ahead of South Africa’s Hashim Amla and Vernon Philander, and Australia captain Michael Clarke.

He was prolific in both Tests and ODIs during the 12-month voting period ending in early August: in 14 Tests, he compiled 1,444 runs at an average of 60.16, including five centuries and five half-centuries, highlighted by a match-saving 211 against Pakistan in Abu Dhabi; in 37 ODIs, he scored 1457 runs with three hundreds, and also completed 39 catches and three stumpings as a wicketkeeper.

“This is an amazing honour and I’ve seen the people who have won it before me and the nominees too, to be named alongside them is wonderful,” Sangakkara said after receiving the Sir Garfield Sobers trophy for Cricketer of the Year from ICC president Alan Isaac. “I admire them greatly and even more so when I looked up at their records on the screen this evening. It’s great to be amongst them. Now to receive this honour this evening, is simply fantastic.”

West Indies legend Brian Lara presented Sangakkara with the Test Cricketer award. “I’m continuing to ensure I am consistent and I need to keep raising the bar each year and keep trying harder and harder to ensure I keep playing good Test cricket,” Sangakkara said. “It’s a constant battle but I have the support of a great team that helps me to do the best I can.”

Sangakkara missed out, though, on a third major gong when Virat Kohli was named ODI Cricketer of the Year, an award Sangakkara had won in 2011. During the period under consideration, Kohli played 31 ODIs and scored 1733 runs at an average of 66.65, including eight hundreds and six half-centuries.

Among the other winners was West Indies offspinner Sunil Narine, who was named Emerging Cricketer of the Year. His hard-to-read variations quickly led to him being labelled a mystery spinner, and he was instrumental in West Indies’ series wins over New Zealand in all three formats in July-August.

Another mystery spinner, Ajantha Mendis, missed out on Twenty20 Performance of the Year, which was won by South Africa opener Richard Levi, for his record-breaking 45-ball century against New Zealand.

New Zealand’s Daniel Vettori received the Spirit of Cricket Award for his sporting recall of a Zimbabwe batsman during a tense Test in Bulawayo.

Ireland left-arm-spinner George Dockrell took home the Associate and Affiliate Player of the Year prize, becoming the second Irishman to win the award after William Porterfield in 2009.

Women’s cricket had two prizes for the first time, with the ICC awarding the ODI Cricketer and T20I Cricketer of the Year, instead of awarding a single honour. Last year’s winner West Indies’ Stafanie Taylor won the ODI gong, while England’s Sarah Taylor took the T20 award.

Besides Sangakkara’s three prizes, Sri Lanka won one more: umpire Kumar Dharmasena took the Umpire of the Year award. That ended a three-year winning run for Aleem Dar and left Pakistan, already unhappy at offspinner Saeed Ajmal’s exclusion from two top award shortlists, without a prize on the day.