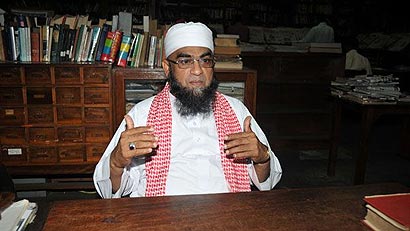 Moulavi Niyas, 59, died of a sudden heart attack on Sunday morning in Badulla, 200 km away from Colombo.

N.M. Ameen, chief editor of Navamani, told Arab News from Colombo that Moulavi was en route to Moneragala to attend a religious function on Sunday evening and died in his sleep early Sunday morning in Badulla.

“Father of four boys and two girls, Moulavi Niyas was almost a household name and an orator equally good in Tamil and Sinhala. He was liked by not only Muslims but also by Buddhists, Hindus and Christians for his down-to-earth concepts that humanity knows no religious and ethnic boundaries,” Ameen said.

He started an Arabic college with some 20 students, which was later named Ihsaniya Arabic College in Colombo with more than 200 students.

Moulavi Niyas established a branch of Ihsaniya in his native Talawakelle. He also operated another madrasa at Mikbar Jumma Masjid in Kochchikade, Negombo.

Moulavi was also a frequent guest on other radio and television media programs.

He impressed audiences in every ethnic group through his captivating eloquence sprinkled with a sense of humor and hilarious anecdotes that induced introspection.

Moulavi was an honorary member of the All Ceylon Jamiyathul Ulama, the president of the Sri Lanka Muslim Peace Council and head of the Majlisul Ulama, a union that looks after the welfare of Islamic religious scholars in the island.

He was also a qazi (Islamic judge) and religious advisor for many societies, including several mosques in the country.

His funeral took place in Colombo Sunday night in the midst of a large gathering comprising people from all walks of life.