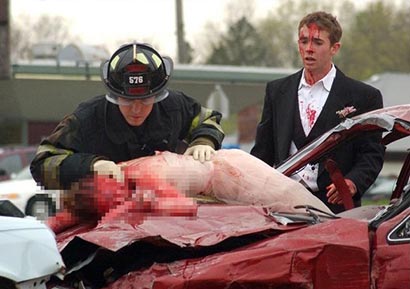 A horrifying picture of a traffic accident is being circulated via e-mail. It depicts a newly wedded couple, still in their bridal attire, on honeymoon. [The picture is too shocking to be printed – Ed]. It is at this point usually, fairy tales say, “They lived happily ever after”. But no such bright future awaits this couple. A proud husband has become a widower hours after his wedding. What must have been a beautiful and radiant bride is now a bloody corpse. Could this tragedy have been prevented if only they (especially she) had been wearing their seat belts? Most probably, yes.

People, especially people in our country, have a lot of misconceptions about the practice of wearing seat belts. Some principal concerns are:

* “I don’t want to be trapped in a fire or underwater.” Crashes involving fire or water happen in only 0.5% of all crashes. So it doesn’t happen often. However, when they do occur the best chance of survival rests in remaining conscious, uninjured, and in full possession of your faculties. The greatest danger is with the impact that precedes the fire or submersion in water. If you’re not using a seat belt, it’s very likely that you will be knocked unconscious or severely injured. If you’re belted, it’s very likely you will be able to unbuckle yourself and get out of a potential fire or submerged car situation.

* “I’d rather be thrown clear in a crash.” Being thrown safely clear in a crash is almost impossible. When you’re thrown, you may be thrown through the windshield, scraped along the pavement, or even crushed by your own vehicle or another one. The idea of being thrown from a car and gently landing in a grassy area beside the road is pure fantasy. Your best bet in a crash is to stay inside the vehicle, securely held by your seat belt.

* “Drivers in air bag-equipped vehicles don’t need to wear seat belts.” Air bags provide supplemental protection in frontal crashes, but motorists can slide under them if they are not wearing a seat belt. In addition, air bags will not help in a side or rear impact or rollover crash. Motorists should wear a seat belt for protection in all types of crashes.

* “Belts can hurt you in a crash.” Properly worn seat belts seldom cause injuries. If they do, the injuries are usually surface bruises and are generally less severe than would have been the case without any belt. Without the belts, you could probably have been thrown out of the vehicle and been injured severely. It is true that sometimes the force of a crash is so great that nothing could have prevented injuries. But studies have consistently shown that injuries in most serious crashes would have been much more severe had seat belts not been worn.

* “The belts in my car don’t work.”  It’s important that everyone realizes that newer shoulder belts are made so that you can move comfortably but they will still lock up in sudden stops or crashes. Many people mistake this freedom of movement as a broken mechanism. Newer shoulder belts are designed to lock up only when the car changes speed or direction suddenly, not when the occupant changes position.

* “I’m not going far and I won’t be going fast.” This is the comment that so many use when asked why they do not wear a seat belt. It’s important to remember that most crash deaths occur within 25 miles of home and at speeds of less than 40 miles per hour. This emphasizes that everyday driving from just one neighbour’s home to another, to school or to the grocery poses the greatest danger. In fact, a collision between 2 vehicles, each traveling at a meagre speed of 30 kmph, can result in an occupant hurtling out of the vehicle and through the windscreen.

* “I’m a good driver, it won’t happen to me.” This, I think, should be the MOST common excuse people tend to use. You may be a good driver but you cannot always control the other drivers on the road. The statistics related to motor vehicle crashes and drunk drivers are devastating. Even if you are driving defensively, a drunk driver coming around the next curve may not be. You never know what might happen.

* “There’s no police around, so I won’t get caught.” It is not due to fear of getting caught and fined by the police that you should be wearing the seat belts (although this may act as a spur); it is for your own safety. It is people who haven’t fully grasped the gravity of the consequences that could follow due to not wearing one, that say these type of things. If you go without a seat belts and die, or worse, be compelled to live the rest of your life paralyzed from your neck down, it’s your tragedy, not the police’s.

A well known example can be used here- Princess Diana’s death. The driver of the Mercedes bearing Princess Diana and Mr. Fayed were killed instantly. The bodyguard, sitting in the front right seat, suffered severe facial injuries and a broken wrist, but was saved largely thanks to his seat belt and airbag. Princess Diana, was not wearing a seat belt, also survived the initial crash but suffered major thoracic trauma, in addition to several superficial cuts on the forehand, arm and thigh and a dislocated shoulder. The first witnesses on the scene found her sitting on the floor with her legs on the backseat and her head wedged between the backs of the two front seats. She may have lived had she been securely belted and thus not thrown about.

Although a large percentage of our country’s population are still opposed to the wearing of seat belts and consider it an unnecessary hindrance, it is heartening to perceive that there is a considerably higher percentage of motorists wearing their seat belts than there was, say, 10 or 15 years ago.

There is another point which needs to be made. Many people who are conscientious about wearing their own seat belts do not bother to go out of their way to encourage passengers in their vehicles to wear their seat belts. Other people too, look down upon a person who forces them to wear their seat belts. But it is best if you always insist if all passengers in your vehicle are belted too. The reason for this is that, even if you have happily buckled up, you may still be injured or die because of a person in your vehicle who wasn’t wearing his or her belt.

There was one particular accident that I remember a few years ago which happened in the USA, in which 3 seat-belted occupants of the car died in a crash, but the lone un-seat belted person in the car lived. It was a mystery how this could happen, so they recreated the accident (computer simulation, I presume). Looking at the injuries of the occupants and their relative positions in the car, it was determined that the person who was not wearing a seat belt caused the deaths of the other three. As the unrestrained passenger bounced around the inside of the car he caused various and deadly injuries to the other passengers, skull fracture to one, something else to another, and when the car came to rest, his unconscious body suffocated the last of the three. Had he too, been belted, there was a huge chance that all four could have lived.

So buckle up, each trip you take!

1 Response to Seat belts save lives