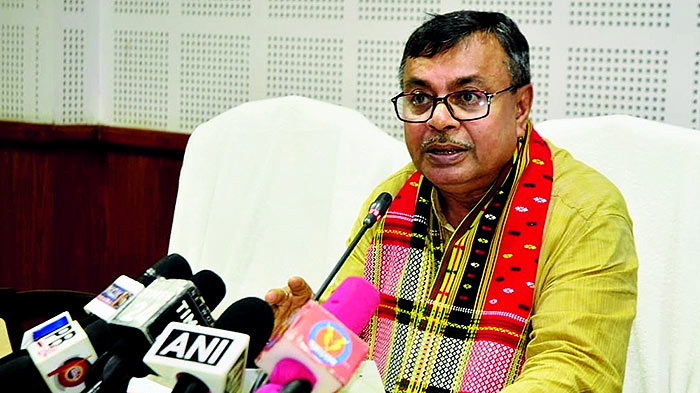 Tripura law minister Ratan Lal Nath on Thursday claimed that several countries including the United States and Sri Lanka were influenced by Bharatiya Janata Party’s (BJP) ideals and were thinking of accepting them.

Nath’s statement came while trying to clarify Tripura chief minister Biplab Deb’s claim that Union home minister Amit Shah shared plans of expanding BJP’s base even in Nepal and Sri Lanka when he was the party’s president, the Hindustan Times reported.

“Our CM meant that all other countries in the world will be influenced by the thoughts of the BJP. But that does not mean the BJP will form its base in those countries. His statement was explained in a wrong way,” Nath said. The video clip of his statement was shared on social media platforms on Thursday.

The minister further claimed that the entire world was drawn towards Prime Minister Narendra Modi’s ideals and persona.

“We launched the Covid-19 vaccine and other countries are procuring the vaccine from us. The International Yoga Day is being celebrated throughout the world after Narendra Modi talked about it. So, the entire world is thinking about his thoughts and ideas.” he said.

A few days ago in a meeting with party leaders in Tripura, CM Biplab Deb said BJP’s expansion of influence in southern states like Kerala and Tamil Nadu was a foregone conclusion given the ambitious strategy adopted by senior party leaders like Amit Shah.

“We were talking at a meeting in the State Guest House, when Ajay Jamwal (BJP’s zonal secretary for northeast) said that BJP had come to power in several states. In reply, Amit Shah said that Nepal and Sri Lanka are still left. We have to win there as well,” Deb said recalling the conversation. Deb claimed that the BJP became the largest party in the world due to Amit Shah’s leadership.