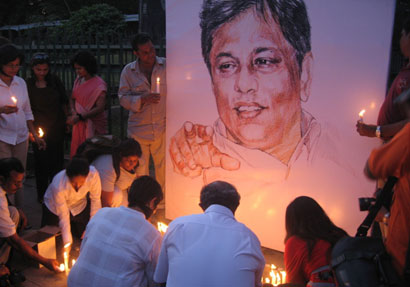 “A year has gone by without any progress in the investigation into his murder,” Lal Wickrematunge said today to Reporters Without Borders, on the eve of the first anniversary of the fatal shooting of his brother, Lasantha Wickrematunge, the Colombo-based Sunday Leader’s well-known managing editor. It is Lal who has replaced him at the helm of investigative weekly, some of whose journalists were recently threatened.

“When finally I am killed, it will be the government that kills me,” Lasantha Wickrematunge wrote in an editorial that was published after his death. Known for his revelations and criticism of the government, he was called a “terrorist journalist” by President Mahinda Rajapaksa, while the president’s brother, defence minister Gotabhaya Rajapaksa, used the courts in a bid to silence him and tried to smear his reputation in foreign press interviews after his death.

“The emotion and anger have not gone away in the year since this famous Sri Lankan journalist’s death,” Reporters Without Borders said. “The anger is being sustained by the government’s flagrant obstruction of the investigation. Lasantha Wickrematunge’s name and memory will not disappear and, in that sense, those who were behind his murder made a mistake.

“Even if these criminals continue to feel sufficiently protected that they can threaten the Sunday Leader’s new editor in messages written in the same red ink, we are confident that one day they will be punished.”

The press freedom organisation added: “We urge the various candidates for the 26 January presidential election to pledge to shed light on this murder and on the other serious press freedom violations that have taken place in recent years and to punish the perpetrators and instigators severely. Some candidates are promising the truth. We hope this is not just words.”

Lal Wickrematunge told Reporters Without Borders: “After a 10-month investigation, the case was transferred to the criminal investigation department but since then they have not taken any serious statements. They called me once, but not again. The examination of the case before the courts has been postponed 24 times. Each time, the police say they don’t have enough evidence. And the only eye witness has been missing for months.”

Lasantha’s widow, Sonali Samarasinghe Wickrematunge, herself a journalist and lawyer who has sought refugee abroad, said in an email to Reporters Without Borders: “One year later, no progress has been made (…) Accusations are being hurled in a desperate attempt to exploit the issue for political gain.”

The murdered journalist’s relatives and friends will meet at his grave in Colombo tomorrow and then participate in series of activities in his memory. Lasantha was attacked by four gunmen on motorcycles as he was driving to work on 8 January 2009. He was taken unconscious to a hospital where he died from his head injuries.