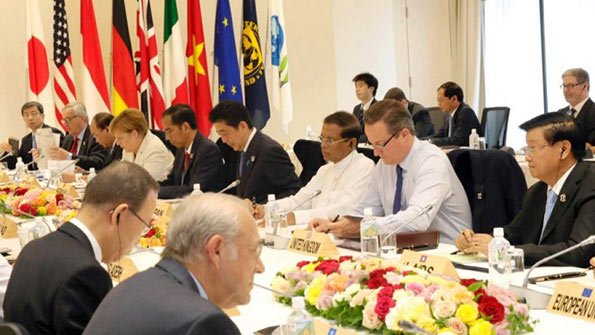 Among the flamboyant leaders, elegantly dressed in Western attire or in colorful national dresses one man stood in a simple white spotless national dress, his face reflecting an aura of contentment. While the leaders reflected power, wealth, vigour and supremacy, one man showed his unassumed strength of simplicity, straightforwardness, humility and unpretentious mannerism.

It is no secret that Maithripala Sirisena scored over the most influential and powerful leaders in the world at the G 7 Outreach Summit. He was the cynore of all media eyes despite major charismatic leaders from Barack Obama, Justin Trudeau, David Cameron, Angela Merkel, Francois Hollande and others were present.

For the media, Maithripala Sirisena was a new Mandela, new Gandhi. “I am sure President Sirisena could win battles with his honest ways, while most of the leaders today prefer the gun or economic power to bulldoze others,” Nanami Sato a television journalist from Tokyo Television said.

“Wow, Sirisena, with his minimalism in display, scores over others,” exclaimed Alexis Natyacova a journalist Moscow covering the G 7 Summit. “Putin, though not here because they have expelled Russia from G 8 and it became G 7, would have fitted into this group of powerful and influential easily. But your President is an exception,” he told this correspondent.

They all came in special chartered planes and they were received a red carpet welcome at the VIP landing strip. President Sirisena travelled by a commercial airline and the Japanese hosts could not lay down the red carpet because the leader came with more than 200 normal passengers. They offered apologies, but one could clearly see their admiration for him in their eyes.

Another difference was at the reception hosted by the Governor of Aichi Prefecture at the posh Nagoya Kanko Hotel. All the leaders got onto the stage to toast the G 7 Summit. All held flute glasses of champagne, wine or other forms of alcohol, barring one leader. Maithripala Sirisena raised his glass of orange juice in toast.

“Simplicity also requires courage, fortitude and true grit,” said Stella Elliamani from Chad, who has come to Ise Shima to cover G 7 because Chad President is attending the Summit in his capacity as the current Chairman of the African union.