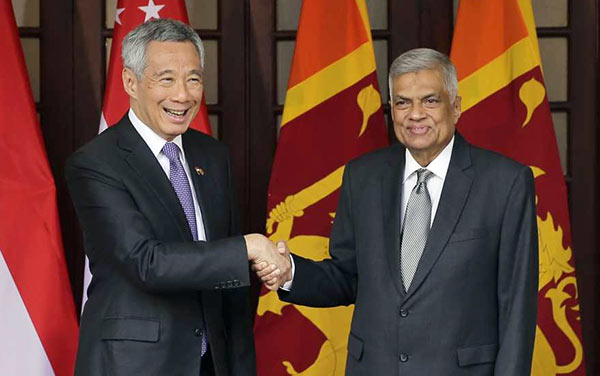 While Sri Lanka is in the process of negotiating free trade agreements (FTA) with several partners, Singapore is the first to complete one with them, and Prime Minister Lee Hsien Loong said he is “very glad” that negotiations went smoothly.

Speaking to the media on Tuesday (Jan 23) towards the end of his official visit to Sri Lanka, Mr Lee noted that the Sri Lankan government is liberalising the economy, and wants to promote investments. In particular, he said they are looking to encourage tourism and develop more trade and interdependence of goods and services.

Mr Lee had earlier witnessed the signing of the Sri Lanka-Singapore Free Trade Agreement in Colombo, along with Sri Lankan President Maithripala Sirisena.

“I think our trade is not so complicated with them,” he said. “And secondly, I think they hope to set an example for their other trading partners,” Mr Lee told reporters.

To that end, he said credit should be given to the officials on both sides who worked very hard.

In response to a question on Singapore not having to face domestic opposition or protectionist pressures in signing the FTA, Mr Lee said he is happy that the Singapore Business Federation and other federations are open-minded, and “take competition in their stride”.

“The SBF is very happy because they are hoping to get access into Sri Lanka and in a way which the Sri Lankan government will welcome,” he said. “Exports, but also investments, and there are major investments which are being planned.”

“On the Singapore side, our market has been more open, and I think our people and companies are much more conscious that they always have to meet international competition,” Mr Lee added.

“Because if you can’t even hold your own in Singapore, you really have no hope.”

Describing his first meeting with the Sri Lankan President as “good”, Mr Lee also pointed out other areas in which both countries can cooperate. He gave the issue of drug trafficking as an example, a serious problem which Sri Lanka grapples with.

“He asked us what we do, what are your policies, and I said our policies are very strict,” Mr Lee said. “We can exchange notes on many things, and we look forward to cooperating together.”