Situation was under control – Cabraal 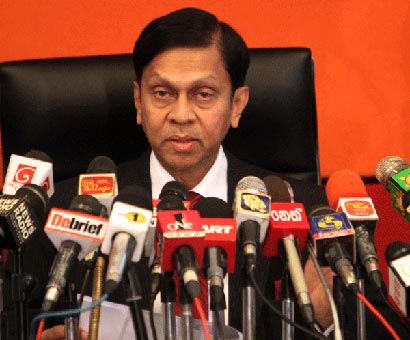 The Central Bank today forecast a higher inflation rate and lower growth for this year stimulated by negative local and global economic factors but added that the situation was under control.

Commenting on the sharply depreciating rupee against the dollar Mr. Cabraal said the exchange rate behavior in the recent past has been highly speculative and current depreciated value was not in line with the fundamentals.

“Although the revision of the intervention policy from “price based” to “quantity based” led to a rather rapid depreciation of the rupee, it is expected to stabilize with the realisation of foreign inflows in the coming months,” Mr. Cabraal said.

He said because of such policy measures the emerging pressures and risks would be mitigated but GDP growth was expected to moderate this year at 7.2 per cent compared with the original target of 8.0 per cent. Mr. Cabraal the slower recovery in advanced economies and the increase in global-fiscal and financial uncertainties could pose a downside risk and added that unfavourable developments in Sri Lanka’s export destinations in terms of political and economic uncertainties could also hamper in reaching the growth projection.

“The government has taken every possible step to maintain a healthy GDP growth and maintain the inflation to a manageable level. I am sure inflation will not go beyond double digits and the GDP growth will not go further below 7 per cent as the economic fundamentals followed and strong policy measures introduced by the government in February – March period this year have begun to show results,” Mr. Cabraal stressed.

Home » Situation was under control – Cabraal