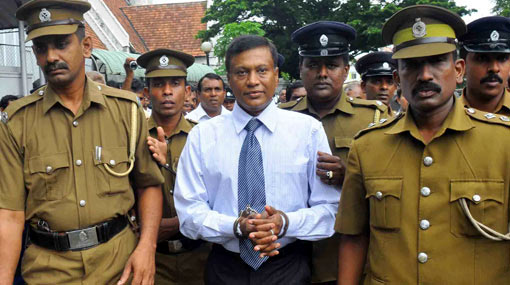 Six suspects including former DIG Vass Gunawardena and his son Ravindu have been sentenced to death after being found guilty for the abduction and murder of businessman Mohamed Siyam by the Colombo High Court Trial-at-Bar.

Former DIG of Police Vass Gunawardena, his son Ravindra Gunawardena and four other police officers were indicted for murder and also indicted of the conspiracy to murder.

Bambalapitiya-based businessman Mohamed Siyam was abducted and murdered in the Dompe area on May 22.

Following investigations conducted into the incident, the Criminal Investigations Department (CID) on June 06 arrested Sub-Inspector Lakmini Bamunusinghe, attached to the office of the DIG Western Province (North), along with three Police Constables (PCs) serving in the DIG’s special unit.

Upon interrogating the arrested police officers, the CID uncovered information regarding the former DIG’s alleged involvement in the businessman’s murder and recorded a statement from Vaas Gunawardena on the same day.

He was arrested by the CID on June 10 and remanded by the Colombo Additional Magistrate. He was interdicted by the police on June 18.