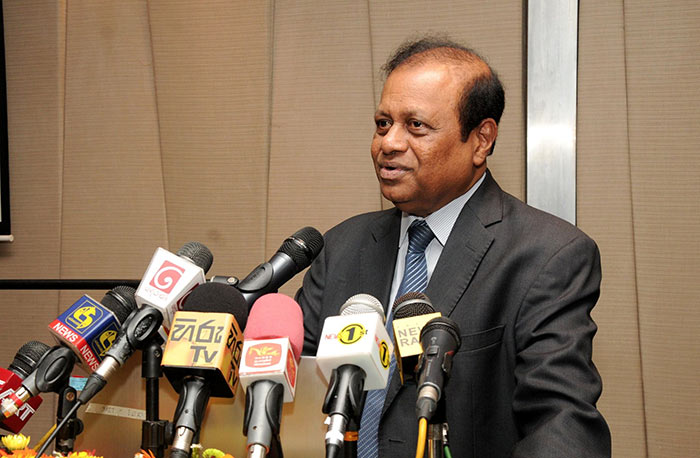 Premjayantha said that there was nothing common in President Gotabaya Rajapaksa’s vision and that of Opposition Leader Sajith Premadasa.

Addressing the media at the Prime Minister’s Office, the Colombo District MP said that Premadasa heading for a heavy defeat at the forthcoming parliamentary poll was talking nonsense.

The parliamentary poll is expected in late April or early May 2020.

Premjayantha pointed out that in the wake of the debilitating setback suffered by the UNP at the presidential poll, the party was pulling in different directions. Those in Sajith Premadasa’s Camp had repeatedly declared their readiness to work with President Gotabaya Rajapaksa though the Sri Lanka Podujana Peramuna (SLPP) was not interested, Premjayantha said.

A smiling State Minister said that MP Sajith Premadasa, in his speeches, routinely targeted those who backed UNP presidential campaign.

Having bagged vast majority of Local Government bodies in Feb 2018 followed by presidency in Nov 2019, the SLPP was preparing for the parliamentary election, MP Premjayantha said. Attorney-at-law Premjayantha said that they were confident of comfortably winning the general election.

Gampaha District MP attorney-at-law Sisira Jayakody said that the UNP-led administration over a period of four years perpetrated Treasury bond scams twice, in Feb 2015 and March 2016, betrayed the war winning armed forces in Geneva in Oct 2015 and through sheer negligence allowed near simultaneous suicide attacks on Easter Sunday in April last year. Having ruined the country, a deeply divided UNP was battling for its survival.

The SLPP emphasized that President Gotabaya Rajapaksa and PM Mahinda Rajapaksa were a winning team.

Attorney-at-law Jayakody expressed serious concern over the way Attorney General Dappula de Livera handled some of the contentious issues. Reference was also made to the recent instructions issued by the AG to the police to take interdicted High Court judge Gihan Pilapitiya into custody.

During the question and answer session, The Island sought an explanation as to why Speaker Karu Jayasuriya had to request the Governor of the Central Bank to provide the relevant annexures and exhibits along with the five forensic audits; State Minister Premjayantha said that he, too, was yet to receive the reports. Lawmaker Premjayantha said that as a person who right from the beginning asked for forensic audits, he didn’t have an issue.

The Secretary General has also informed the Governor of the Central Bank as directed by the Speaker to take necessary action to make available complete audit reports to Parliament at the earliest.

MP Jayakody said that those who worked overtime to suppress 2015 and 2016 Treasury bond scams were trying to divert public attention by creating fresh issues. Lawmaker Jayakody pointed out as to how the UNP sabotaged the debate on Presidential bond scam report on the basis a Tamil translation of the report was not available.

He quoted General Secretary of the Communist Party DEW Gunasekera as having said that forensic audits were meant to save those responsible for 2015 and 2016 Treasury bond scams.