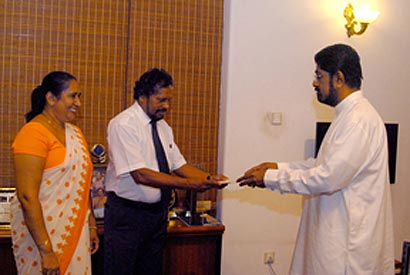 Veteran journalist Mohan Samaranayake has been appointed as the new Chairman of the Sri Lanka Rupavahini Corporaton with effect from today.  The appointment letter in this respect was handed over to Mr. Samaranayake by the Minister of Mass Media and Information Mr. Keheliya Rambukwella this morning.

Mr. Samaranayake acquired an Economics (Honours) Degree from the University of Peradeniya.  He commenced his career as a Journalist and was also the Director News of the Sri Lanka Broadcasting Corporation.

He has also functioned as the Chief News Editor, Director News, Deputy Director of the Current Affairs Section and as the Deputy Director General of the Commercial Section of the Rupavahini Corporation.

Mr. Samaranayake has also served as the National Information Officer of the United Nations Information Centre in Colombo and was also a Lecturer in English at the Wayamba University in Sri Lanka.(niz).