Solving people’s problems is not a political drama or a media show: President 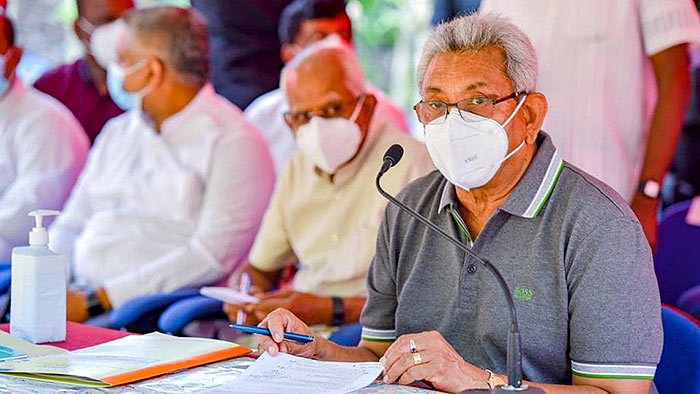 President Gotabaya Rajapaksa on Saturday emphasised that visiting the people and solving their problems is not a political drama or a media show, and that it is not his policy to identify problems only through the officials without going among the people.

“The next presidential election is almost four years away. Going to the village is to fulfil the mission when in power. No other President has gone to remote villages to solve people’s problems. It is not my practice to stay in Colombo and consult only the officials and identify the problems of the people. Whoever criticises this system, I work according to my policy,” President Rajapaksa said.

“I became the President after working among the people. You can be a people’s leader only by working with the people,” the President said instructing the young people’s representatives to go and work among the people. The President expressed these views while participating in the ninth ‘Gama Samaga Pilisandara’ program held at the Dickellakanda Junior College premises in the Dickellakanda Grama Niladhari Division within the Deraniyagala Divisional Secretariat Division in the Kegalle District on Saturday. The President emphasised that if any individual or group engages in illegal activities based on the decisions taken to solve the problems of the people, they will be severely punished. President Rajapaksa said a decision was taken to give the cultivation rights of the traditionally cultivated lands to the farmer. It has been revealed that a group of people are taking advantage of this and harming the environment and the forest reserve, the President said.

The power of nature must be used for the betterment of man, President Rajapaksa said, adding that that nationalism could not be maintained without strengthening the economy and that the aim of the government was to build a national economy based on agriculture. The ‘Gama Samaga Pilisandara’ (Conversation with the Village) program was launched on 25 September 2020 in the Badulla District. Past programs were organised covering Matale, Ratnapura, Anuradhapura, Ampara, Polonnaruwa, Kalutara and Moneragala districts.

Dickellakanda village is located about 23 km from Deraniyagala town and borders the Sri Pada reserve. Asgala, Pallahena, Namalwatta and Urawanawa villages belong to the Dickellakanda Grama Niladhari Division. These villages have 208 families and a population of 718. Maliboda, Pothdeniya and Magala are the other villages around Dickellakanda.

The people present at the occasion explained to the President the various problems they were facing. Responding to complaints regarding road difficulties, the President instructed officials to commence work on the Pothdenikanda to Dickwellakanda road from Monday (8 February) and complete it expeditiously.

1 Response to Solving people’s problems is not a political drama or a media show: President

Home » Solving people’s problems is not a political drama or a media show: President