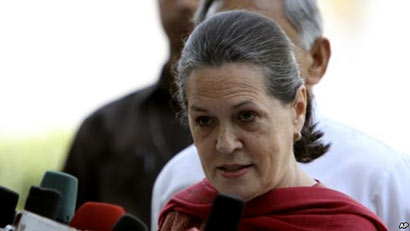 Rajiv Gandhi was killed by Tamils with Tamilnadu’s leading politicians implicated in the cruel assassination of Rajiv Gandhi in Sriperumapadur,Tamilnadu using a Tamil (LTTE) suicide bomber. These very same politicians are now without any qualms of conscience appealing to Sonia Gandhi, widow of Rajiv, to condemn Sri Lanka for alleged atrocities, when in fact Tamilnadu has been doing everything possible to shield and pardon the killers of Rajiv Gandhi and prevent a sentence of death given to these killers confirmed by India’s Supreme Court from being carried out.

It none other than the very country that Rajiv’s mother birthed that eventually vanquished the top leadership of the LTTE that hatched the plot to kill Rajiv Gandhi.

If Sonia Gandhi has a clear conscience she must ask some uncomfortable questions from people like Karunanidhi and ilk in respect to their blood stained role in the murder of Rajiv Gandhi. In the same breadth Sonia Gandhi must express her undying gratitude to Sri Lanka and its security forces for defeating a formidable terrorist force i.e. LTTE, that had not only her husband Rajiv Gandhi murdered by a human bomb i.e. Dhanu, but also hundreds of other innocent Tamil and non – Tamil people. India must never forget this aspect of its history when exercising its vote at the UNHCR sessions in Geneva on March 21, 2013 though India forgot in 2012.

A combination of factors enhanced by lust for political power tends to make people forget even those that assassinated one’s husband and those implicated in the killing as well. It is possibly these reasons that Sonia Gandhi, present Chairperson of the Congress party and widow of Rajiv Gandhi immediately denounces Sri Lanka for its “unspeakable atrocities” on Tamils obviously worried that about the fate of her party as a result of the DMK walking out. Has the Indian Central Government in particular the widow of Rajiv Gandhi forgotten that her husband was killed by the LTTE in Tamil Nadu and the very party leader that has walked out of her coalition and on behalf of whom she is now speaking denouncing Sri Lanka was implicated in the Jain Commission report? http://www.youtube.com/watch?v=OXHKJdVrAPQ

Rajiv Gandhi was killed around 10p.m. on 21 May 1991 at Sriperumapadur, Tamil Nadu having piloted his flight to continue his election campaign by a human bomb (Dhanu) an assassination planned and executed by the LTTE. Rajiv Gandhi’s assassination is poignant because his death was carried out by a foreign terrorist group on Indian soil – the very terrorist group that his mother helped create. Rajiv Gandhi too offered his own bullet proof vest to Prabakaran.

The contradictions and confusions associated with the death, its investigations and the final report leaves many unanswered questions and the lack of the will by his own widow to bring the perpetrators to book.http://www.youtube.com/watch?v=4bi9Vhh-mSA – sensational disclosure on Rajiv Gandhi assassination. Moreover a new book —Conspiracy to Kill Rajiv Gandhi: From the CBI files — by the former chief investigator of the CBI, K Ragothaman, claims that the then IB director and current West Bengal governor MK Narayanan and former national security advisor never shared this video with them.

Making matters further confusing is when Janata Party leader Subramaniam Swami accuses Sonia Gandhi of making use of the LTTE to smuggle Indian artifacts out of India to be sold in Italy. Just listen to these links.

§ That Karunanidhi told an LTTE delegation that Varatharaja Perumal should be done away with.

§ The Jain Commission went on to dub the entire Tamil community as having helped the LTTE because an assassination of this nature could not have been possible without the explicit help of the state authorities.

§ Justice Jain report says “The LTTE was in continuous interaction with the chief minister, Shri Karunanidhi, primarily to ensure their activities continued unhindered even after the Padmanabha killing.” – The Government chose not to take action by stating that the Commission did not recommend action on the accusation.

§ The DMK has also made counter accusations. DMK accuses the Indian Government of also given active support and encouragement. We agree with Karunanidhi on this fact. DMK also accuses the Indian Government of negotiating with the LTTE even while IPKF was in Sri Lanka and that Rajiv Gandhi himself requested Karunanidhi to be an intermediary between him and Prabakaran. The fact that the Narasimha Rao Government did much to stand in the way of the Jain Commission investigation also enhances that many in the Central Government have plenty of skeletons for their role in nurturing the LTTE.

§ Incriminating DMK further are IB reports and independent corroborations that reveal the following and helped Justice Jain conclude that DMK nurtured the killers of Rajiv Gandhi.

§ Karunanidhi transferred all police powers (traditionally under chief secretary) to his trusted associate home secretary K Nagaraj. It was after this that LTTE started establishing bases in Tamil Nadu

§ “Orders from above” ensured all LTTE operatives arrested by Tamil Nadu police were released including the arms seized from them.

§ Nagaraj states that when he took action in the Padmanabha case, Karunanidhi interfered with the investigation and the assassins were allowed to escape and the 5 persons who had helped them escape too were released on bail.

§ Coincidentally, it was the same LTTE that killed Padmanabha in Chennai that assassinated Rajiv Gandhi. The rifle used in the Padmanabha killing was recovered from the Bangalore hideout where Sivarasan lived.

§ Karunanidhi also admits to meeting Kasi Anandan of LTTE but says he did not meet him after the Padmanabha killing – Anandan says otherwise.

§ Lest India has amnesia it was after successive attempts to create a Dravidistan (Tamil Homeland) since 1920s that the DMK party won the 1962 general elections headed by Karunanidhi securing 51 legislative seats that launched the “independence from India” movement. Jawahalal Nehru had to quickly bring in legislation to ban parties and individuals from demanding independence from India.

§ The Jain Commission Report has confirmed all doubts that the Indian intelligence services – RAW has been outsourced to destabilize nations in South Asia. RAW is also accused by V Naidu (former President of BJP) of nurturing the LTTE to destabilize Sri Lanka and that the LTTE were funded and equipped by the Indian government for this purpose. Kao the chief of RAW was told by Indira Gandhi to repeat what India did to Bangladesh in Sri Lanka.

The links between LTTE and RAW outside of the Indian Central Government framework even forced former Indian High Commissioner J N Dixit to accuse RAW of giving Rs5 crore to the LTTE.

If there were support of this magnitude from India and Tamil Nadu they would all be accomplices in murder of the innocents. In helping one side to kill what logic is there to be accusing the other who are trying to protect the civilians from being targets? What kind of Indian policy is it to support a terrorist movement simply to satisfy their policy of destabilizing India while keeping the separatist agenda from coming back home to Tamil Nadu? To what extent can we say that India’s intelligence perhaps misguided the Indian Central Government along the way preferring to strike deals with the LTTE and its partners at international levels? Is there not enough evidence to prove that India’s intelligence did dupe the Indian Central Government and could well be doing the same?

Former Indian Premier V P Singh said that “the sponsorship of the LTTE by successive Congress governments that lionized the LTTE, gave it a hero’s image and entrenched it in the social fabric of Tamil Nadu. It was during Rajiv’s regime that weapons on a massive scale were supplied to the LTTE and extensive training camps for the LTTE were set up in Tamil Nadu ” and he went on to say that “the most glaring fact is that the most dangerous of the LTTE cadres, Dhanu-was taken by a lady Congress worker to Shri Rajiv Gandhi”.

We would like to know if India and in particular Sonia Gandhi wish to continue that mayhem by going behind those that are implicated in the killing of her husband, Rajiv Gandhi?