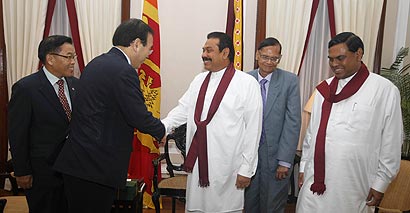 Young June Park, South Korean Deputy Minister for Trade and Energy of Ministry of Knowledge Economy of South Korea has expressed his government’s support to implement measures to protect the environment and minimize the damaging issues which arise from the accelerated development programmes in Sri Lanka.

Deputy Minister also expressed Korea’s commitment to strengthen bilateral ties between the two countries, especially, in investment and tourism sectors, in the discussion with the Economic Development Minister, Basil Rajapaksa at the Presidential Secretariat.