Speaker should be independent – Anura Kumara 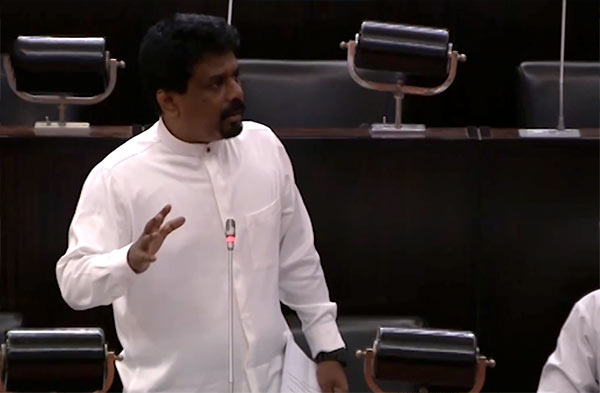 Dissanayake said this, when the Speaker announced that a statement presented by All Ceylon Tamil Congress (ACTC) Leader Gajendrakumar Ponnambalam, under Standing Order 27(2) could not be allowed as it was sub judice.

“Every party leader in the House has a right to raise questions under Standing Order 27(2). That right should not be violated. It is sad that the Speaker made this ruling. We urge the Speaker to reconsider this decision, because the decision had been taken without any discussion with Party leaders,” he stressed.

Leader of the House, Minister Dinesh Gunawardena, said the Speaker’s order is based on Standing Order 36(f), which clearly says that a sub judice matter or on which a judicial decision is pending would not be discussed in the House. It is the general practice of 27(2) statement, to hand over a written copy of the statement to the Speaker. The Speaker, after going through the statement, has given the ruling, he said.

Joining the discussion, Opposition Leader Sajith Premadasa said Standing Orders do not restrict the 27(2) statements of the Party Leaders, as it is their privilege.

Ponnambalam said according to Standing Order 36(f), a question shall not refer to any matter under adjudication under Court of Law or on which a judicial decision is pending and it should be read along with Standing Order 91, which also says the Speaker could allow if there is no impact on the outcome of the matter before the Court.

“The matter before the Court of Law is decided. So I request my statement. The other matter is that we too have a mandate and should be given equal time as the Opposition Leader,” he added.

He requested that he be allowed to make the statement, as the matter is not sub judice, as the Court case was over.

The Government and the Opposition MPs discussed about the matter for a long time, however, it ended without any conclusion.

1 Response to Speaker should be independent – Anura Kumara