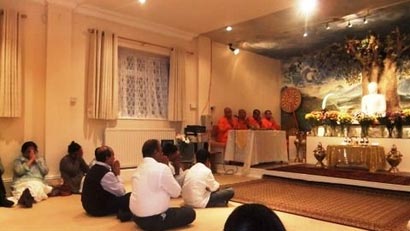 The Religious programme and Dhamma sermon were conducted by the Chief incumbent of the Thames Buddhist Vihara, Ven Pahalagama Somarathana Nayaka Thero and residing monks of the Temple.

Following the religious observances, Dinner was served to everyone.

A large number of such religious observances were held with the participation of Bharatha’s family members, friends, members of Sri Lanka Freedom Party and Sri Lanka Mahajana Party and large number of his Kolonnawa constituency and Colombo district supporters in Sri Lanka.

Late ex Parliamentarian Bharatha Lakshaman who had relentlessly championed the cause of bringing SLFP in to power, provided a yeoman service to maintaining the winning stream and the success of the party during the difficult era.

However this event was openly given wider publicity in the Sri Lankan community media channels in the UK. It was notable that none of the Sri Lanka Freedom Party- London members participated the religious programme.