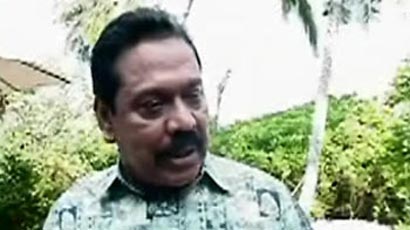 The Government will act firmly on the recommendations of the Lessons Learnt and Reconciliation Commission (LLRC) which is due to submit its report on November 19, President Mahinda Rajapaksa said yesterday.

In a wide ranging interview conducted in Addu, Maldives and broadcast by the Indian news channel NDTV, President Rajapaksa said if the LLRC Report highlights any human rights violations by any persons, the Government would not hesitate to take action against them. “If they endorse it (any rights violations), we will take action.

I am not going to shield anyone. Neither do I wish to do so,” the President said.

He said he would study the LLRC Report and present it to Parliament. It becomes a public document thereafter.

He said the Government was moving swiftly in the process of reconciliation, in terms of resettlement and political reconciliation. More than 95 percent of those displaced have been resettled.

The government has begun a dialogue with the Tamil National Alliance (TNA), he told the interviewer. He said that the TNA delegations have been visiting the UK, USA and other countries seeking solutions and canvassing support for internal matters without discussing them with the government.

“We have 23 political parties in Parliament and we would appoint a Parliamentary Select Committee (PSC). That is the best place to settle this issue. Let the Government and the Opposition get together and propose a solution.”

He said the TNA was yet to name their representatives to the PSC. Referring to the Indo-Lanka fishing issue, the President said that Sri Lanka over the past year had to stave off over 40,000 Indian boats intruding into Sri Lankan waters. It was rather unfortunate that the Jaffna fishermen were being deprived of their rights to fishing.

“It is a problem for Sri Lanka, but we have never taken them into custody following a request by the Indian Prime Minister. Earlier the Navy handled it but now even the Navy has been asked not to do so. At present we have allowed them,” he said.

The President called for a give-and-take policy with regard to the fishing issue. The matter is now under discussion. However, it is best that the Sri Lankan and Indian fishermen meet, discuss and resolve this problem without the Government coming in.

2 Responses to Govt will act firmly on LLRC recommendations