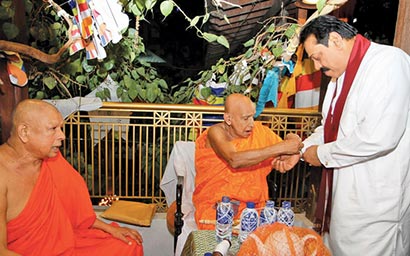 President Mahinda Rajapaksa attended a Bodhi Pooja Pinkama held at the Gangaramaya, Hunupitiya on Thursday to invoke blessings on him, the War Heroes and the country.

The Pinkama was held to mark the President’s completion of two years of the second term of office following a convincing victory at the 2010 Presidential Election.

The Maha Sangha led by the Most Ven. Udugama Sri Buddharakkitha Mahanayaka Thera of the Asgiriya Chapter were present on the occasion.

After the President participated in religious observances at the Viharaya the Maha Sangha chanted Sethpirith and invoked blessings on him.