‘Sri Lanka, a country where all could live in harmony’ 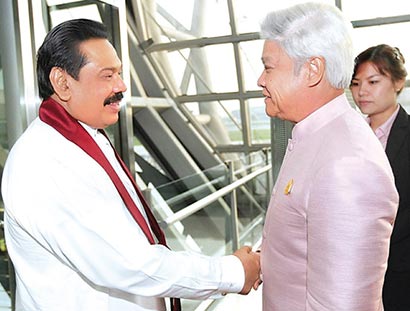 Sri Lanka has become a country where all communities could live together in harmony and has entered the development path after ending a 30 year war, said President Mahinda Rajapaksa at a meeting with Sri Lankans residing in Thailand at St Regis Hotel in Bangkok.

The President urged them to capitalize on the economic opportunities available in the country as Sri Lanka has relaxed rules and regulations that hampered investment opportunities.

President Rajapaksa also pointed out that the country’s economic growth rate has risen to 8 percent during the last two years and a 22 percent growth was recorded in the Northern region of the country as a result of the development projects currently underway in Sri Lanka.

“Though the truth is such, some websites engage in propagating false news on Sri Lanka thereby tarnishing the image of the country,” he further explained.

Sri Lankans, wherever they are in the world, should work with a sound and proper understanding of this prevailing situation, he stressed. “All Sri Lankans despite their ethnicities should love the country. The government’s sole purpose is to create a country which the next generation could be proud of, “the President said. Minister Wimal Weerawansa, MP Sajin Vaas Gunawardana, Secretary to the President Lalith Weeratunga and Sri Lankan Ambassador to Thailand General Shantha Kottegoda were also present.

Home » ‘Sri Lanka, a country where all could live in harmony’