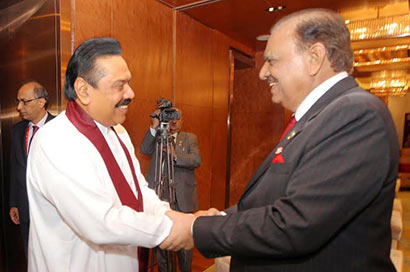 President Mahinda Rajapaksa held bilateral discussions with his Pakistani counterpart Mamnoon Hussain this afternoon (May 20) in Shanghai, China, on the sidelines of the 4th Summit of the Conference on Interaction and Confidence Building Measures in Asia (CICA).

Pakistani President extended his country’s unwavering support to Sri Lanka when both leaders met for the discussion. During the talks, the two leaders also discussed reviving cricket tours between the two nations and enhancing trade relations to boost the amount of trade that takes place between the two South Asian nations.

President Rajapaksa arrived in China this morning commencing a three-day official tour to attend the conference on an invitation from the Government of China. The President is schedule to conduct bilateral talks with several other heads of states in parallel to the summit proceedings. He is also scheduled to address the summit.

Meanwhile Secretary General of United Nations Ban Ki Moon and Russia’s President Vladimir Putin have arrived in Shanghai to attend the summit. The Chinese President Xi Jinping will host a banquet for the visiting heads of states and overseas delegation tonight. 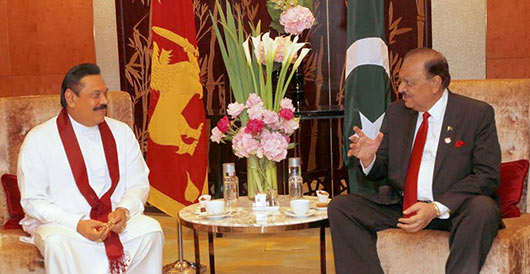