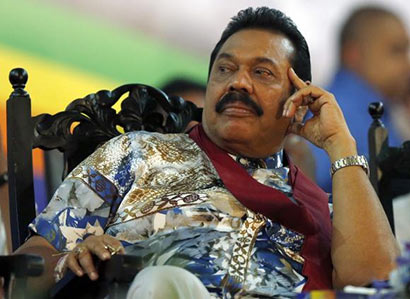 Sri Lanka’s army defied orders from aides of former president Mahinda Rajapaksa to keep him in power “by force” when it became clear he had lost his bid for a third term, an ally of the newly elected leader said on Saturday.

But an army spokesman said he was unaware of any such order.

Rajapaksa lost Thursday’s election, ending a decade of rule that critics said had become increasingly authoritarian and marred by nepotism and corruption.

Rajitha Senaratne, a lawmaker and a spokesman for new President Maithripala Sirisena, said Rajapaksa’s administration had sought the backing of the military to stay in power.

“The army chief got orders to deploy the troops on the ground across the country. They tried attempts to continue by force. The army chief defied all the orders he got in the last hours,” Senaratne told reporters in Colombo.

“We spoke to the army chief and told him not to do this. He kept the troops in the barracks and helped a free and fair election,” Senaratne said.

Mohan Samaranayake, spokesman for former president Rajapaksa, said he could not comment on the allegation.

Military spokesman Brigadier Ruwan Wanigasooriya said he was unaware of any such order. He said the military stayed out of the election process at every stage.

“Sri Lanka’s military will not do anything to disrupt the democratic traditions and process,” he said.

Speculation had been rife in Colombo just before the election that force could be used to keep Sirisena voters from polling stations or even that the military could intervene if Rajapaksa looked set to lose.

Sirisena took 51.3 percent of the vote, while Rajapaksa got 47.6 percent. Rajapaksa, even before the official results were announced, conceded his defeat and left his official residence.