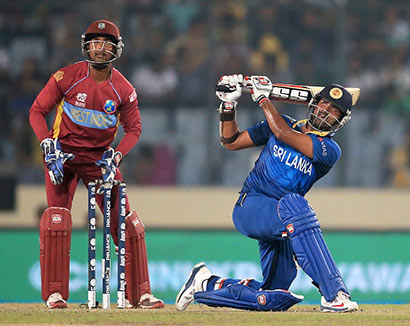 West Indies banked on a frenetic finish, but Sri Lanka’s bowlers had choked the chase to suffocation-point before heavy rain, then marble-sized hail, cut the innings short and sent Sri Lanka to yet another major final. When the heavens opened, West Indies had needed 81 from 37 balls, with six wickets remaining. The Duckworth-Lewis calculation had them 27 runs adrift.

It was always a dangerous ploy to begin the chase slowly, but doubly so with rain in the air, and against an attack that features better death bowlers than most in the competition. West Indies had actually scored 17 from the first, wayward over from Nuwan Kulasekara, but as an unambitious Chris Gayle and Marlon Samuels hunkered down, they mustered only 17 from the next six.

Sri Lanka’s spinners were allowed to settle, and soon, even the expansive shots were being mistimed. Dwayne Bravo tonked 30 for 19, as messages from the dugout implored Samuels to shift into overdrive, but when Bravo fell in the 14th over, West Indies’ chances grew desperately slim.

Darren Sammy, who has been the finisher of the tournament, was about to face his first ball when the weather intruded. Two Lasith Malinga overs remained, however, and the required rate may have been beyond even Sammy’s rapid blade.

Only Tillakaratne Dilshan prospered out of Sri Lanka’s senior batsmen, and even he scored only at a run-a-ball, running two batsmen out, including himself, in the process. Kusal Perera’s bold 26 from 12 and Angelo Mathews’ canny 40 from 23 gave the innings its flourishes, while Lahiru Thirimanne’s 44 from 35 was its substance.

Perera had dealt powerfully to Krishmar Santokie through the leg side, to set Sri Lanka off at more than 10 an over in the first four, before Santokie had him playing on to a leg cutter. Mahela Jayawardene, so often Sri Lanka’s big-game performer, was dismissed cruelly before he had had the chance to make an impact with the bat. Dilshan called him through after chopping one to point, but sharp work in the infield and a good throw over the stumps caught Jayawardene short, before he faced a ball. Kumar Sangakkara’s demise for 1 from six balls was of his own making. He pushed out early against a slower Samuel Badree ball and lobbed a simple catch to the bowler.

Dilshan lacked fluency, as he has done throughout the tournament, but combined sagely with Thirimanne for 42 to lift Sri Lanka from 49 for 3. He would run himself out too, haring out of the crease when there was no run to be had, but Thirimanne completed the recovery, striking two sixes – including an uppercut over third man off Andre Russell. Thirimanne’s innings was as secure as it was well-paced, setting the team up for a death-over spike, with wickets in the bank.

Mathews had been tentative against Sunil Narine early in his innings, often having his outside edge beaten as he prodded. But having been 13 from 14 balls, he gathered pace against Santokie in the penultimate over, to help deliver a furious finish worth 32 in the final two overs. Mathews slammed Santokie over long-on first ball, before collecting a four in the same spot.

Then, when West Indies strengthened the on side, he made room to loft a length ball over cover for four. A flat, fast six over cover next over was the shot of the innings, and a hooked four sent Sri Lanka to 160, before Mathews was athletically caught at deep midwicket by an advancing Bravo, last ball.

Dwayne Smith slogged a four then launched a six off the first two balls of the reply, but following that over, West Indies slowed almost to a stall – first by choice, then by coercion. Malinga arrived in the Powerplay and in his first over bowled Gayle, then Smith with offcutters, before Llendl Simmons was out lbw to Seekkuge Prasanna’s first ball of the tournament. At 34 for 3 in the eighth over, West Indies had backed themselves into a mighty corner.

Bravo lashed out valiantly as Sri Lanka’s slow-bowling phalanx sought to tamp the run rate down even further. He walloped Rangana Herath and Prasanna over cover, but with Samuels flatlining at the other end and Sri Lanka’s fielders throwing themselves around to save boundaries, he could not quite spur a game-breaking charge. A Kulasekara slower ball had him caught at square leg as the required rate spiked over 12. When wild winds brought the downpour over the Sher-e-Bangla later in that over, Samuels was unbeaten on 18 from 29.