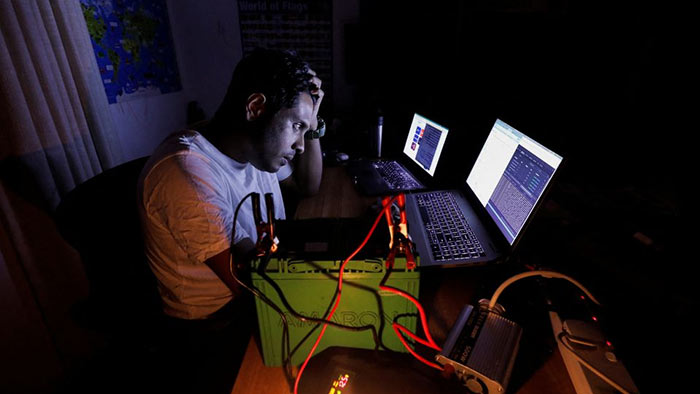 An IT officer who is home-based uses a car battery to charge his laptops as he works during the power outage, in Colombo, Sri Lanka. (Reuters / Dinuka Liyanawatte)

Sri Lanka’s cabinet on Monday approved new electricity tariffs to reflect the cost of coal and power generation to take effect this month, Power Minister Kanchana Wijesekera said, without saying how much higher they would be.

Sri Lanka raised electricity tariffs by 75% last August and a cabinet proposal to raise them by a further 25% had been under consideration on Monday.

Sri Lanka is struggling under its worst financial crisis in seven decades and has to put its massively indebted public finances in order to unlock a $2.9 billion IMF loan that was agreed in September.

“Cabinet approval granted to amend the general policy guidelines for the electricity industry and to implement a cost reflective electricity tariff to be implemented from Jan 2023,” Wijesekera wrote on Twitter.

“The concern with the proposed tariffs was that they would impact the poor too much,” Janaka Ratnayake, chairman of power regulator Public Utilities Commission of Sri Lanka (PUCSL), told Reuters.

He added, however, that the PUCSL accepted the Cabinet’s decision, taking into consideration coal costs and expenses to operate hydropower plants. He also did not say how much higher they would be.

Sri Lanka has a state-run power monopoly, the Ceylon Electricity Board, which has incurred massive losses. The government has committed to increasing power prices to reduce losses and put public finances on a sounder footing.