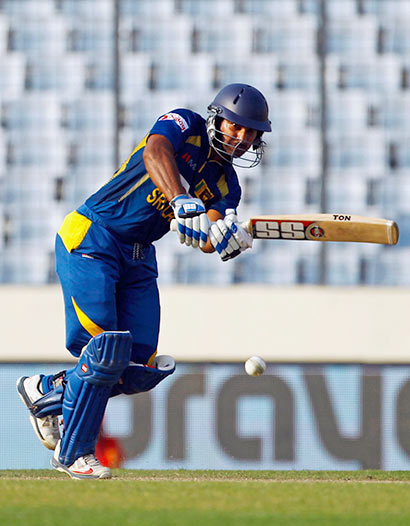 Two days after achieving their highest profile ODI victory, Afghanistan’s diverse attack added to their growing reputation, against Sri Lanka, but in pursuit of 254, the batsmen could not muster the same pugnacity. Scuttled by Sri Lanka’s own varied threats, they fell short by 129 runs. The victory, their seventh in a row, assures Sri Lanka a place in the Asia Cup final.

Afghanistan had muzzled Sri Lanka expertly in the early overs, before Mohammad Nabi’s carousel of bowling talent exerted further control to induce a middle-order wobble. They had had Sri Lanka at 158 for 5, then 184 for 6 in the 42nd over before a calculating final surge from Angelo Mathews ensured Sri Lanka achieved the competitive 253 for 6 nonetheless. That finish had been set up by Kumar Sangakkara’s third 50-plus score of the tournament, but Afghanistan may take pride in the fact Sangakkara was compelled to reticence against them. Runs had flowed freely from his blade against both India and Pakistan.

Mathews had arrived in the 37th over, but did not hit his first boundary until the 47th as he steadied the innings by working the field in the interim. Afghanistan had hidden their inexperience well for 90% of the innings, but could not maintain their standards at the death. Mathews prospered in the poorly-protected midwicket region, as the Afghanistan fielding waned, and the bowling grew more erratic. Mathews finished unbeaten on 45 off 41 as Sri Lanka took 49 runs from the final four overs. The beamer that forced Dawlat Zadran out of the attack in the final over epitomised Afghanistan’s indiscipline at the close.

Thisara Perera and Ajantha Mendis had no such trouble and tormented Afghanistan with the ball, taking three wickets apiece to stifle any hopes of an upset. Afghanistan lost their first wicket in the second over, and they could not string together a stand that might have worried Sri Lanka. The last wicket fell in the 39th over. Only Lasith Malinga, who was being saved for the death, finished without a success.

Mohammad Shahzad had backed away to smear Suranga Lakmal over deep extra cover in the second over, but an attempt to repeat the shot two balls later ended with his off stump disturbed. Having never faced Malinga before, the Afghanistan top order could not quite decide what to do with him. Mostly, they played down the wrong line and missed. Asghar Stanikzai enjoyed the pace on the ball early in the innings, but when Thisara found modest swing into the batsman in the 13th over, a gap between pad and prodding bat allowed the ball through to uproot his off stump.

Predictably, Mendis proved no less an enigma to batsmen who had never faced him before. Noor Ali Zadran sought to whack his way out of the Mendis maze, but was caught off the outside edge at point. Then when two more wickets fell cheaply to pace, reducing Afghanistan to 73 for 5, Nabi began to plot a tentative course past the two-finger googlies and carrom balls. But when he fell to Chaturanga de Silva in the 32nd over and the last three wickets simply tumbled.

Afghanistan’s prospects were significantly brighter in the afternoon when when Najibullah Zadran and Shapoor Zadran not only restricted Sri Lanka’s opening pair better than Pakistan and India had, they also struck earlier. Shapoor got one to jag in off the surface to demolish Lahiru Thirimanne’s stumps, while Kusal Perera was denied the width outside off stump he so relishes.

Sri Lanka had traveled at 2.55 in he first nine overs, before a frustrated Kusal sought to manufacture momentum. He prospered briefly, blasting Shapoor for a four and a six on the legside in consecutive balls, before mowing two more fours off Dawlat Zadran next over, but Afghanistan’s response was swift and effective. Nabi made a bowling change at either end, and two maidens followed. Two more quiet overs later, he played on to his stumps, attempting a swipe through mid on.

There were glimpses of imperious form from Sangakkara – the checked drive through midwicket chief among them – but as Mahela Jayawardene fell cheaply again, Sangakkara omitted the risks that have lately introduced dynamism to his ODI batting. He reverted to a more familiar and watchful accumulation, while Nabi marshaled his considerable resources. Each new Afghanistan bowler – there were eight in all – was eager to play his part. None released the pressure his teammates had built. If there was an error in Nabi’s strategy, it was that he did not bowl himself enough, as even Sangakkara failed to anticipate the bounce and turn he achieved.

Dinesh Chandimal contributed a stuttering 26 to a fourth-wicket partnership worth 74, while Sangakkara crossed fifty. Just as it seemed the pair would accelerate, they both went in quick succession. Chandimal was bowled aiming an expansive stroke over cover, before Sangakkara was run out for 76 thanks to a misunderstanding with Angelo Mathews. (ESPN CricInfo)