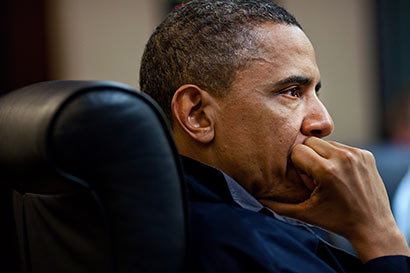 It is time the world stood up against a tyrant that is destroying world peace and exposes not only the tyrant but the other nations working in association with the tyrant. It is only then can the world find true peace. Should the world continue to heed derogatory statements and reports issued by the US State Department on nations while the US blatantly violates every law in existence and the UN can only silently watch because its officials have degraded themselves by bowing at the feet of imperialists headed by the US? Planet earth has been abused enough, peoples rights have been violated, nations have been flogged by a handful of nations who are being steered by corporates and financiers who want to loot nations. Americans and the people of the world now need to rise against these tyrants so we may all live in peace without being manipulated.

Is it for a joke that the US drafts Resolutions against nations when its own crimes are nothing it can preach to nations and accountability of US has not been forthcoming for any of America’s violations?

When US denounces nations, ridicules them its record for 2013 is nothing America can be proud of

A country that violates human rights both at home and abroad does not deserve an iota of respect or centre stage in any international public forum. We are talking about a country that has used the atomic bomb twice in the space of 3 days knowing what the outcome was when they released it on 6th August 1945 upon Hiroshima. This country has been sending unmanned drones, bombing nations to bring ‘democracy’ while a merry team of the same corporate and financiers run off with the wealth of nations leaving nothing for ordinary Americans or even the soldiers who have been used as guinea pigs by the Governments and their officials. We are talking about the US Government who have planned and plotted to secretly tap and violate the rights of their own people because they know what they are doing is wrong and they do not want to be caught and found out by the American masses. Today, the American people have found too late that they have fallen prey to bogus ‘terrorist’ claims and promises of greater security by the US state but instead under the pretext of securing the rights of the American people, the US Government has denied them these rights.

Finally the American people are realizing that they have been fooled. Is it too late? A handful of evil people get the dirty work done by others who are paid to carry out orders. It is time these parties realized the wrong they are committing and refuse to be party to the evil that is taking place around us. The UN heads are equally to blame for they have silently allowed a monster to dictate to the world’s nations, bully these nations and bring them to their knees by various covert and overt plots and plans that have been engineered and orchestrated simply using the power of money to buy over people. These illegal schemes and plots are well known but no one in power is willing to take the initiative to rally the people around to stop the charade. America has been upto every evil we can imagine though we must clearly distinguish between the American public and the American leaders and their coterie of ultra rich who are the real culprits of the evil that prevails. The ordinary masses are ignorant and have been fed lies by their own leaders.

It is now time that the UN General Assembly nations resolve to put a stop to the unethical practices that the US and a handful of other nations wanting to subjugate the world and dominate them are currently doing in what is a white supremacist imperial neocolonial agenda. The Third World needs to regroup, reassess, realign themselves to a new economic order, bridge the gaps between the rich and power. Hungary set an example by kicking out IMF and giving debt-free loans. The people have been flogged enough it is time that the Third World leaders stop being vassals of the mighty nations simply because they are using them to meet their own agendas. Leaders of the Third World owe it to their people to show true leadership and bring their people out of the miseries that presently engulfs them.

As for the US and its political leaders who are controlled by global MNCs, transnational corporate, global financiers the tables need to turn on them. For far too long they have ruined the world, the planet and the people

IT IS TIME FOR NAVI PILLAY TO CALL FOR AN INTERNATIONAL INVESTIGATION FOR ALL OF AMERICA’S CRIMES WITH JUDGES FROM THE THIRD WORLD INCLUDED INTO THE PANEL.