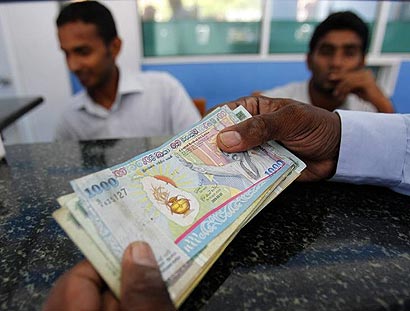 SOME countries have oil. Others sit on vast deposits of ore.

Now Sri Lanka is striving to capitalise on its own bountiful resource: a mountain of cheap accountants.

For three decades the island nation was plagued by a civil war, which ended last year when government troops finally vanquished the separatist Tamil Tigers.

During the conflict, government universities, which could offer places to only about a fifth of the student population, were frequently closed.

“Many people went to private accounting colleges instead,” Duminda Ariyasinghe, of Sri Lanka’s Board of Investment, said. “It became a kind of habit; many still do accounting alongside their academic degrees. So, you see, accounting has become something of a national speciality.”

During the war, internationally recognised accounting qualifications also allowed holders to migrate, an attraction that allowed many to escape the conflict that claimed at least 80,000 lives.

As a result, Sri Lanka has the largest pool of qualified CIMA (Chartered Institute of Management Accountants) members outside Britain, more than 2000 of them. It also has about 80,000 accountants in training.

A literacy rate of about 93 per cent and wages that undercut those in India by as much as 30 per cent lend Sri Lanka a crucial, further edge as a destination for outsourcing financial services.

An accountant with four years’ experience and a CIMA qualification earns about ₤12,000 ($18,250) a year in Sri Lanka. A similar bean counter in Britain costs nearly five times as much – and his Sri Lankan colleague also puts in nearly an hour a day more at the office.

Many Sri Lankans sidestep college to do short diploma courses and cost even less, but the country is not aiming to become a destination for cheap book-keeping done on a bulk basis.

Rather, it plans to become a global centre for tasks such as derivatives pricing and risk management for money managers and hedge funds, stock research for investment banks and underwriting for insurance companies.

“Sri Lanka can play in niche areas, but it cannot provide the same scale and size of operations that India offers,” Keshav R. Murugesh, of WNS Global Services, one of the largest outsourcers in the country, said. British groups that have a Sri Lankan presence include HSBC and Aviva.

“Sri Lanka is like an ‘India-lite’,” one Western executive said. “You have the same opportunity to cut costs, but it’s generally a more pleasant place to operate. There’s less congestion in the cities and less competition for the best workers.”

Sri Lanka is also strong in software engineering. The American technology giant Motorola has a research and development centre in Sri Lanka and eCollege, a Pearson company, built one of its core online learning platforms with Sri Lankan engineers.

Sri Lanka’s University of Moratuwa has had the most students accepted by Google’s Summer of Code scheme – in which student developers are paid stipends to write code for open-source software projects – than any institution in the world for the past three years.

The roll-call of international companies establishing footholds has stoked hopes that a boom in high-end outsourcing could help to provide the peace dividend that the Government is so keen to harvest.

The IT and business process outsourcing sector is the fifth- largest source of exports, bringing in about $US384 million a year, and it is growing at about 26 per cent annually.

The Sri Lankan Association for Software and Services Companies has set a target for outsourcing to bring in $US1 billion a year by 2015 and, to encourage investment, the industry has been granted a 12-year tax holiday by the government.

Some claim that outsourced financial services can challenge tea and textiles to become the bedrock of Sri Lanka’s export industry. Indeed, some suggest that accounting is now embedded in the national DNA.

Bradley Emerson, the head of CIMA in Sri Lanka, said: “Three or four decades ago Sri Lanka was sending accountants to Africa, the Middle East and Australia.

“We’ve been a global supply hub for some time. Students are still taking both academic and professional qualifications; they realise they have to compete in a globalised world. The difference is now they’re staying at home.”