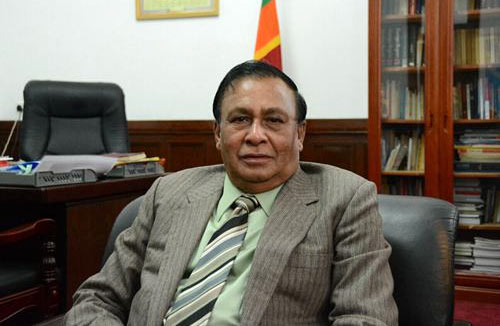 Sri Lanka aims to finalize a free trade agreement with China this year and the country’s prime minister will visit Beijing in May, the Sri Lankan ambassador said on Saturday, amid rising concern in the South Asian nation about Chinese investment.

Hundreds of Sri Lankans clashed with police at the opening last month of a Chinese-invested industrial zone in the south, saying they would not be moved from their land. It was the first time opposition to Chinese investments in Sri Lanka had turned violent.

China signed a deal with Sri Lanka late last year to further develop the strategic port of Hambantota and build a huge industrial zone nearby, a key part of Beijing’s ambitions to create a modern-day “Silk Road” across Asia.

Speaking to reporters on the sidelines of a national day reception at the Sri Lankan embassy in Beijing, ambassador Karunasena Kodituwakku was upbeat on relations and downplayed the protests.

“In the case of China, this is our 65th anniversary of trade relations,” he said. “So this will be the best way to commemorate by signing a free trade agreement.”

China has spent almost $2 billion so far on Hambantota and a new airport and wants to spend much more, part of China’s “One Belt, One Road” initiative to build a new Silk Road with massive investments in infrastructure from Asia to Europe and beyond.

Kodituwakku said Sri Lankan Prime Minister Ranil Wickremesinghe would attend a major summit on the initiative in Beijing in May. China says about 20 foreign leaders are coming, but has yet to provide details on who is attending, apart from Philippines President Rodrigo Duterte.

The ambassador admitted that Chinese officials had expressed concern to him about the controversy over Hambantota, though he said the numbers protesting were small.

“Despite the opposition from a small group, the government will go ahead,” he said.